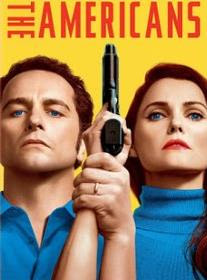 Well, it ended a while ago, but I've just now got around to watching the last episodes from the sixth and last season of The Americans. It was a very interesting concept, following around two Russian spies that pretend to be a normal two kid and a picket fence couple while doing missions for the KGB on American soil. Luckily, it was set during the height of the Cold War, not now, so none of that fake news Twitter bull.

It was well played, too: Mathew Rhys and Noah Emmerich are both great as the Russian male agent and the unknowing FBI agent who moves right next door on one of faith's whims. However, it was Keri Russell who shone throughout the sometimes uneven run of the show. I mean, people knew her from Felicity, where she was a cute cheerful university student, but in this show she is seductive when she needs to get someone's trust, ruthless and unstoppable when she needs someone dead, unwaveringly loyal to her home country and hard as a rock underneath her ever changing appearance and disguises.

You can't run a show for six seasons and not evolve your characters (well, a lot of shitty shows do that), but The Americans excels in making the main characters have to face not only the consequences of their missions, but also the consequences of normal people living their lives. If Nadiejda the spy grows throughout the show, so must Elizabeth the wife and mother. I especially admired the twists and turns of Philip's moral qualms and how he wanted to reconcile his different personas while Elizabeth chose splintering apart as her way to cope.

Now, not all is well with this show. There were seasons when nothing interesting was actually happening. Henry's character never evolved away from a stupid kid that asks no questions and is missing from the series for entire seasons, while his sister not only was figuring it out, but was also recruited as a "second generation" agent. Admittedly, Holly Taylor was annoying as hell in that role, but she didn't write her character's script. I also suspect that people got turned away from the show by the brilliant portrayal of a loyal Russian agent by Keri Russell. She was too hard, too Russian, too human for comfort. I can only admire both her and the show developers for going all the way in with her character.

All in all, I have mostly good things to say about the show and if you have not watched it, I highly recommend it. It seems to me that this show has enough followers to warrant a full feature film production in which the actors could shine in a one-off mission spy movie. I am also curious on what Keri Russell will do other than a rumored Star Wars appearance that I believe is a poor choice for someone who shone so brightly in a real role.

About the ending... it actually ends. It's not one of those shows that get cancelled without any preparation, leaving everything in limbo. However it is also one of those endings that is generic enough for them to have planned it seasons ago. We see some of the consequences spell out, but there is not enough time to really understand where it all leads to. It was nice to see the reactions of the characters to the sudden end, but it was certainly not enough to make a statement about the real outcome of their actions.