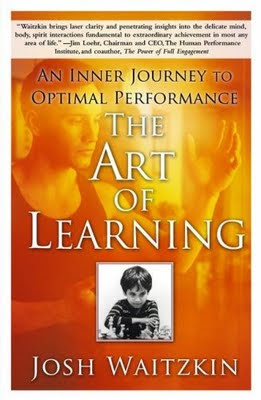 The Art of Learning is a wonderful book, both concise and useful, with tremendous sources for inspiration at every level. It also has more meaning to me, as it started with an investigation in the life of Josh Waitzkin, prompted by my renewed attention to chess.
To start from the beginning, I've first heard of Josh Waitzkin when I've started going through the "academy" section of ChessMaster XI. The first chapter in this section was Josh Waitzkin's academy, which taught with examples of both life and game. I was intrigued, so I looked the guy up. This way I found references to Searching for Bobby Fischer, a Hollywood movie about the early life of chess prodigy Josh Waitzkin, based on a book by his father. I watched the film, with both positive and negative feelings, but at the most I was even more intrigued. I then found out about the two books that Josh wrote: Attacking Chess and The Art of Learning and started reading the latter, since I had to read it on my old Palm in the subway and I am not yet at the level in which I can mentally visualize chess notation.
The Art of Learning is everything I wanted in a book about learning: the personal introspective view, the theory of learning and its mechanics, clear examples and methods of achieving the same results. Frankly told, I doubt many people can learn at the same speed as Josh Waitzkin can - clearly the guy is a genius - but there are insights in this book that blew me away.
The book is structured in three parts:
It all ends with a climactic Taiwan International martial arts championships that Josh wins, overcoming adversity and malevolent judges, a story that rivals any of Van Damme's movies, but also shows where the inspiration for those came from.

There are some ideas that I could understand immediately, seem obvious, but I've never thought of before:
One of them is that the unconscious mind acts like a high speed parallel processor, while the conscious mind is a serial decisional engine. An expert in a field does not think faster than a beginner; he only placed many of the underlying principles in the subconscious, running them at high speed, and leaving the conscious mind decide, like a manager, from the granular information that is precomputed and available. That makes sense at the smallest biological level. Think of the frog eye that sends a yes/no signal through the optical nerve when a fly enters the field of view - the frog does not have to decide if what it sees is a fly or not. But it also explains quite clearly the effect of training, something that I, to my shame, had not understood until now. Training is not simply learning, it is also moving the information downwards, "internalizing" it, as Waitzkin calls it. GrandMasters do not think about the possibilities on the chess board from the bottom up, they already see structure and work directly with the aggregated, higher level information. Martial arts experts don't count the steps in a complicated move, they just make them. Normal people do not put a foot in front of the other, they walk, they don't string words up, they speak.
Another idea is that the process of learning, done in small increments, allows the direct internalization of concepts before we use them in combinations. First move a few pieces until you know how they work, don't start with complicated chess games. Reduce the scope of your training and the internalization will come a lot faster. Then, in a complex game, you just use the things you have learned previously. When training to fight, train each small move before you start combining them.
This is an important idea in The Art of Learning: the difference between what Waitzkin calls entity-learning and process-learning. Entity learners will try to find the quick way out, find the small trick that get the problem done; they will care only about the end result, collapsing under the fear of losing. The process learner would enjoy the challenge, see each problem as something that can be solved if attacked metodically and chipped away at bit by bit. They will value the process of learning over the end result. An entity learner will try to learn as much as possible, in the end reaching mediocre levels of understanding in all fields, while a process learner will take each process as far as possible before engaging another. Process learners would say "I didn't learn enough" when losing, while entity learners would say "I wasn't good enough".
I am sorry to say that I apparently fall towards the entity-learner category. It is obvious that must change and I hope it can. What I gathered from this concept is that entity learners identify themselves with the solution of a problem. Losing makes them losers, winning makes them winners. Process learners identify themselves with the process of learning, making them bad or good learners. A very good point Josh makes is that the type of learning is usually caused by the way parents reacted to the early success of their children and also that it can be changed, it is not set in stone like just another cemmented childhood psychological baggage.
An interesting thing about the book is that it also provides some mechanisms to improve, to reach that "zone" of serenity and presence in the moment. Borrowing from Taoist concepts, Josh Waitzkin advocates leaving in the moment, being present, aware, and he provides methods to train to reach that present state at will. I find that very interesting.

In the end I would call this one of the most useful books I've read and I certainly intend to improve on myself using some of the guiding principles in it. Josh is an extremely competitive and intelligent person and, given the opportunity of having good and talented parents, made the best of it. I am not saying that all can reach the same level of success and internal balance, but it is surely refreshing to see one of these great people lowering themselves to the level of the normal guy and giving him a few pointers. That is exactly what The Art of Learning is.

Hey, thanks for the link up.