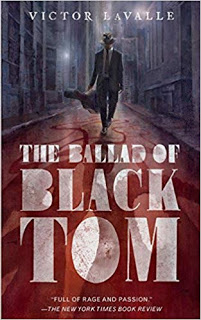 The Ballad of Black Tom is yet another book inspired by Lovecraft and featuring racially abused people of color. But unlike Lovecraft Country, this is not funny or adventurous, it is just painful. LaValle creates a complex character, a black man who respects his musically talented father, but neither did he inherit his old man's gift, nor can he abide by the man's strict moral code. In a world where magic exists at the fringes of human perception, he dabbles with things he should not and suffers for it. Stricken by grief, he becomes Black Tom.

I thought the story started kind of slow, then went a bit too fast, then ended too abruptly. Victor LaValle made me fall in love with the character, only to finish the standalone book on a vague note. After reading several stories that I was hoping were not sagas or trilogies or whatever (and they were) I finally get to one that I wanted to continue and it doesn't.

Bottom line: good book, but the main character was better. He deserves more than this.