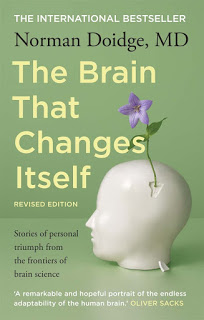 The Brain that Changes Itself is a remarkable book for several reasons. M.D. Norman Doidge presents several cases of extraordinary events that constitute proof for the book's thesis: that the brain is plastic, easy to remold, to adapt to the data you feed it. What is astonishing is that, while these cases are not new and are by far not the only ones out there, the medical community is clinging to the old belief that the brain is made of clearly localized parts that have specific roles. Doidge is trying to change that.

The ramifications of brain plasticity are wide spread: the way we learn or unlearn things, how we fall in love, how we adapt to new things and we keep our minds active and young, the way we would educate our children, the minimal requirement for a computer brain interface and so much more. The book is structured in 11 chapters and some addendums that seem to be extra material that the author didn't know how to properly format. A huge part is acknowledgements and references, so the book is not that large.

These are the chapters, in order:
There is much more in the book. I am afraid I am not making it justice with the meager descriptions there. It is not a self-help book and it is not popularising science, it is discussing actual cases, the experiments done to back what was done and emits theories about the amazing plasticity of the brain. Some things I took from it are that we can train our brain to do almost anything, but the training has to follow some rules. Also that we do not use gets discarded in time, while what is used gets reinforced albeit with diminishing efficiency. That is a great argument to do new things and train at things that we are bad at, rather than cement a single scenario brain. The book made me hungry for new senses, which in light of what I have read, are trivial to hook up to one's consciousness.

If you are not into reading, there is an one hour video on YouTube that covers about the same subjects: