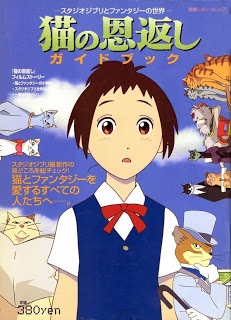 I can't say that Neko no ongaeshi had a great effect on me. The animation was OK, the story was like a fairy tale, but it lacked something, a special feeling that I was expecting to have.

The plot is that a young girl saves a cat from death and finds herself uncomfortably rewarded by the entire hidden nation of cats with a trip to their kingdom, a marriage to their prince and a free transformation into a feline. She doesn't want this, but helped by new friends, she manages to escape. I am not really spoiling anything here. It wasn't like at any moment I felt that she might be in real danger, which I think was the biggest flaw of the story. Another anime from Studio Ghibli, Spirited Away, features a much more beautiful and scary foray in a magical world and one of the novels of Clive Barker, The Thief of Always, brings the required tension and fear that is missing in this film.

Another issue I had with this is that, other than eat mice and fish, the cats behaved exactly like humans, missing entire opportunities to delight the viewer with so many catty things. They don't use their claws, they don't do acrobatics, they live in a feudal community and are loyal to each other. The whole concept of a feline kingdom passed right by the creators of the anime.

My conclusion is that this is a film for very little children or a lazily made one. It's not that I didn't enjoy watching it, but was completely bland, devoid of any inspiration that would make it rise above average.