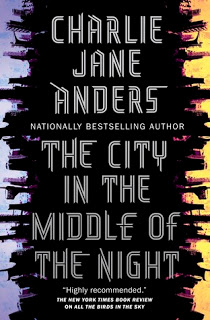 The City in the Middle of the Night reminded me of Octavia Butler's Xenogenesis, only way lighter. The same female centric focus, the slight weirdness of descriptions and feelings that comes from a truly different perspective. Charlie Jane Anders describes a planet far away from Earth, a colony that devolved after humans reached the planet until it got to feudal levels of government and technology. The planet is tidally locked, so people live on the narrow edge that separates frigid night and scorching day. There are some aliens there as well. Pretty cool story and concept, so much so that I hated it when the book ended and it was NOT a trilogy or a saga or whatever. Hard to please me, right?

The writing style isn't on par with the richness of the concepts, though, and I was also thrown off often by gaps in the understanding of science, social norms and even sensory descriptions. Yet once I understood the author is a transgender woman with sensory integration disorder, it started to make sense. The main characters are all women. There are no real romantic or familial relationships between them, unless counting the fact that they are always feeling things strongly and lying together in beds without doing anything. The lack of sexuality in the novel is refreshing but going a long way in the other direction until it feels eerie. And they often react physically or mentally in such overblown ways that it's hard to empathize. Stuff like someone saying something and they suddenly go to a corner to heave, or having seen someone smile or being touched in a certain way just short circuits their brain. There are a lot of leftover threads in the book, things that get partially described and you just wait for them to be explained later on and they just don't. Also the mix of first person perspective for Sophie and third person for everybody else is strange and forces one of the characters as the main one, even if maybe a reader would relate better with somebody else.

So I had difficulty in rating this book. I would give an excellent rating to the world building and the concepts presented there, but an average on characterization (even if most of the book is about what characters do and think and feel). I would rate some descriptions of internal struggle and emotion as great, but others really lame, especially when it comes to characters who seem to be designed to be thrown away later on. The writing style is not bad, but not great either. It's a mixture of brilliance and average that is hard to reconcile into a single metric. I mean, I could describe the entire plot of the book in two paragraphs; the rest is just people bumbling around trying to make sense of the world and themselves. No character has a real back story, except a few defining moments that feel pulled out of a hat, and they are understandably confused all the time. Who are their parents? Everybody in the book is an orphan. Why so many descriptions of invented food if does nothing for the plot, yet no sex, only a rare and weird longing sort of platonic love? Why is everybody so casually violent, yet so disgusted with violence in their inner thoughts?

It seems to me that this is a book that only some will be able to connect to (the others will get delirious and murderous). I liked the ideas, I liked the characters, it's just that they are coming from nowhere and ultimately going nowhere.