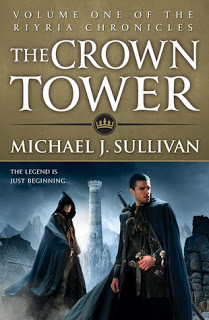 It seems there is a dedicated fan base for the Riyria series that so enjoy the setup that they ignore the quality (or lack thereof) of the writing. The writing style is amateurish at best, the characters are not fleshed out, yet the little building they get is contradicted with impunity whenever the plot requires it, the point of the story of the book has not been revealed after more than half of it, while the plot doesn't make any sense most of the time.

I am sorry, Michael J. Sullivan, but I could only read 60% of The Crown Tower before deciding I will not continue and I will not try any of the other books in the series. For the readers, imagine a story about implausibly competent youngsters that are forced to work together by a kindly old professor for no good reason other than they have to work together. Imagine a prostitute who decides to fight the world and open her own brothel, right across the street from her former pimp and king of the street, but the only concerns she has is how to bribe city officials to give her a business permit. After half of the book in which the characters have barely begun to do any of the activities listed above, nothing really happened, while hints have been placed to imply this is a world where magic exists, goblins, elves, dwarves, gods, yet none of them made an appearance.

I don't understand how stuff like that gets any awards. Is it just because they sell? Toilet paper sells and doesn't win anything! Just... ugh!