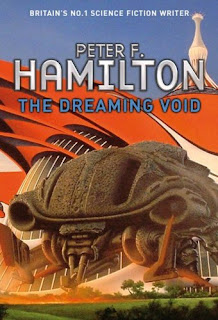 After finishing the Commonwealth Saga, by the same author, I started reading the next series: The Void Trilogy. As in the aforementioned saga, the story does not end in any way at the end of the first book, you have to read all three books to reach the end, which effectively makes this another huge monolithic story, not a series or saga.

Set in an even more technological advanced future, but in the same Commonwealth universe, it depicts the interactions between a powerful pseudo-religious void worshipers, ANA (a quantum artificial intelligence where people download when the are tired of living and the next evolutionary phase of the SI) and its competing factions, the different alien races and the void, which is a dark impregnable sphere in the middle of the galaxy that only some psychic humans seem to penetrate.

The style is the same, the writing as almost flawless as before. I do think that P.F. Hamilton is one of the greatest sci-fi writers I've read, up there with Tolkien and Herbert.