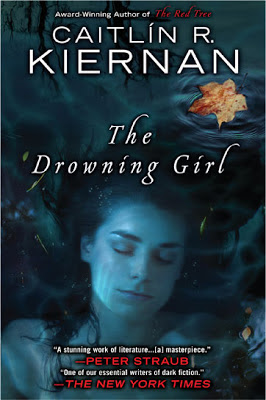 We live now in a world where people get the same education, see the same movies, read the same books - if at all. We then watch the ones around us and see only ourselves and we get bored. That is why, I believe, we start to see various mental illnesses or strange behaviours as interesting. That is why, I think, The Drowning Girl, by Caitlín R. Kiernan has received so wonderful reviews.

That doesn't mean the book is not brilliant. Kiernan paints the world as seen from the eyes of a lesbian paranoid schizophrenic, combining ideas from paintings, old legends and written stories into a whirlpool of staggering creativity. However, I do have to wonder, would the book have received the same amount of positive reviews if the main character was a straight man?

All that aside, I have tried to keep an open mind when reading the book and I have found that the way the author mingles stories and goes back and forth, keeping the reader on their tows, is both excellent and terribly irritating. It builds up a lot of tension that needs to be released into a grand finale. However, the climax of the book seemed to me to be somewhere in the middle, with the ending lagging and wasting into pointless mental delusions.

It is hard for me to recommend or not recommend this book. It is clearly well written and very inspired. It not only delightfully weird, but also draws information and data from all kinds of art fields and mingles them together in an interesting way. The construction of the book aside, though, leaves a plot that doesn't really mean anything. It's the maelstrom of thoughts and feelings of a mentally troubled person with a slight mystical component which, even till the end, is not really clear if it is only in her mind or has some factual truth.

I did enjoy one thing, though, the idea that something can be "true", but not "factual". If you think about it, it makes sense, but usually words like "truth" hold an objective mask on them, when most of the uses of those words are actually subjective. Yep, it's true :) I also liked the way details about the artists led to connections to other works and facts, that a thorough analysis of art can show hidden worlds and interesting perspectives.

As a conclusion, what leapt into mind when trying to find a book that is similar to this was Geek Love, by Katherine Dunn. In a word: freaky. The Drowning Girl is much more interesting, though, and doesn't try so hard to shock with the character's sexuality or personal weirdness. But in the end, having read it, I felt like it said nothing. An interesting journey towards nowhere in particular.