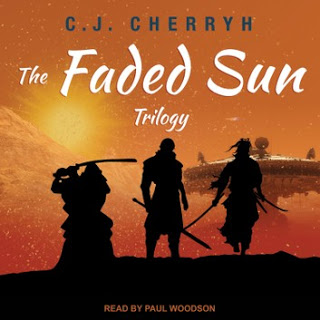 To be honest, I've reached the beginning of the third book in The Faded Sun Omnibus and I've decided to stop.

It was 1978. Religious people living in the desert under strict rules and brandishing swords were still cool and not considered terrorists. C.J.Cherryh decides to write a story about a fierce warrior race that works in the employ of others to wage space war, driven by a very exact culture that emerged in the desert. They carry black veils that only let show their eyes and are very partial to rituals and hand to hand combat. No wonder humans kicked their asses, but even they are terribly anachronistic. They have waged 40 years of war with the humans, under the contract of the Regul, fat immobile and amoral beings that care only for their own tribe's well being.

Reminds you of Dune, the Freemen and the Harkonen? Well, this is where the similarity ends. Where Dune was deep, these three books are tediously drudging through all kinds of futile rituals and each character is painfully introspective, to the point that tough warriors bred for battle are recognizing and thinking about their feelings of fear all the time. Worse, nothing really seems to be happening. It takes a book for a ship to get to its destination.

And the book has aged poorly, even when in the whole thing there are maybe a page of technical descriptions, probably less. There is no mention on what makes the ships run, what types of weapons are used, how computers work, etc. A ship just "fires" and it is never even described in what way.

But the ultimate sin is how little sense it makes. I mean, this is the age of Star Wars, where... errr... people on starships wage battles with swords... OK, the author isn't the only one who screwed stories up, but the Mri are presented as this scourge of the battles, yet they don't know technology or can even read or write, they are appalled by mass warfare and prefer hand to hand combat (like real men!) and are strict in what they are allowed to do, know or even think. It's like giving space weaponry to the Flinstones. OK, you get the Jetsons, but how is that supposed to be terrifying or a match to the voracious human penchant for mass destruction? And there is more. After 40 years, we learn that people have never captured Mri alive, never studied them. The Mris themselves are accompanied by huge bear like semitelepathic animals that they never name or even know how they reproduce. Unlike Frank Herbert, who was obsessed with ecology, Cherryh feels no need to explain how a species of huge carnivores exists on harsh desert planets that are almost devoid of life and water or how three completely different species can share air and food, or how the animals and plants on a different planet are the same as from one that lay 120 planets away, or how language and culture stays the same for 80000 years. A lot of things just don't make sense, including the story's main premise, which is the fear that humans and Regul alike carry for the Mri.

Bottom line: if it were nice to read at least, I would have given it a shot, but after two books of people thinking in fear about what others are thinking of them, I gave it up. It was just tediously boring.

Now, Cherryh was at the beginning of her illustrious career and there are books written by her that I liked. I just hated this one.