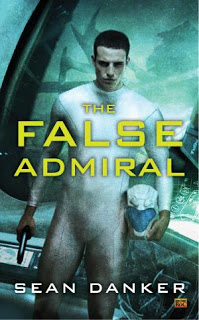 Imagine a space pulp "escape from a room" story and you get The False Admiral (also known as simply Admiral). Sean Danker writes a short and fast paced story about three Evagardian space navy members that find themselves on a derelict ship on an unknown alien planet. From start to end the hero of the story, helped by the other younger three, must solve problem after problem in order to keep them alive. It's a short, fun and simple book.

At first I was convinced that this was not the beginning of the story. The main character mentions previous events that are not described in the book and he makes efforts to hide his real identity from the others, to the point where they have to choose between trusting him or arresting him as an enemy spy. But no, that part of the story is not written yet. A second book in the Admiral series has been released, called simply Free Space, but I will probably not read it. And this is not because I did not enjoy Admiral, but because I have other stories I would rather read.

Bottom line: when you need a quick disconnecting read, try this book. It's dubious sci-fi and it is rather more similar to detective noir than space opera or military stories, but it is fun.