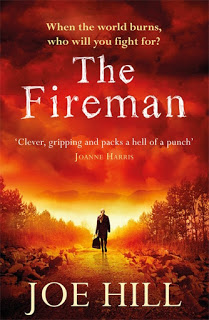 The Fireman has a lot going for it: world ending global pandemic, superpowers, people finding strategies in order to survive, communities giving into the mob mentality, heroes fighting evil, etc. Joe Hill writes well and the story captivated me from start to end.

That being said, there are some issues with the book. The story is about a global infection with a fungus that makes people burst into flames, but narrowly focuses on a few characters in a small American town. Yet the story abounds in details for every scene: what everybody does, what they think, how the scene changes. Also, while there are some explanations of why things happen the way they do, close scrutiny destroys any logical explanation, so less material would have helped suspension of disbelief. I feel like a little editing that would have removed 10-20% of the book would have benefited it greatly, fixing some issues with pacing. There were times when I just had to skip paragraphs, as in moments of tension the author insisted of describing all kinds of inconsequential things.

Also, at the end of some chapters, there were little phrases where the character would disclose the outcome of the next chapter. I did not appreciate that. Imagine a scene where a character is hopeful and, instead of hoping with them and then being devastated by the story, you just go through the scene knowing how it is going to end. Don't do that, Joe!

It was interesting that the main protagonist (who is not a fireman, BTW, that was a silly title) is a woman. Her character, abused, manipulated and lied to by people in authority in her life, is almost feminist in nature. Other secondary characters are also female or children, with the writing focusing on human relationships. If I didn't know better, I would have said the book was written by a woman. I can only commend Joe Hill for being so good at describing the world and the people from the eyes of this character.

Other than that, the story was really fresh. I don't want to spoil anything here, enough to say that it made my emotions alternate wildly between excitement, fear, disgust and frustration. While optimistic in nature, The Fireman describes so many ways in which people just give in to their inner selfishness and evil. The themes touched by the story vary, but gravitate around one central idea of human relationships: a couples, as communities and what happens when these seemingly good things are contaminated with fear. These are themes one is used to find in Stephen King books and, surprise!, Joe Hill is actually King's son. He is trying his best not to advertise this, though, and I think he is a good writer on his own.

The characters are very human, well created, frustrating in their mistakes, just like normal people are. The author made the lead characters a bit too clean, always taking the high road, always being spared of the tough soul scarring choices by their environment or the people around them. I thought that was a weak point in the book. Without being forced to make hard choices, characters have no reasons to evolve.

Anyway, my recommendation is to read this book. It is scifi and fantasy and clinical dissection of humanity. It is well written, even if a little too long for its story.

Almost two years ago, Variety was reporting that the book was being developed by Fox into a movie, yet there is no other information more recent about this.