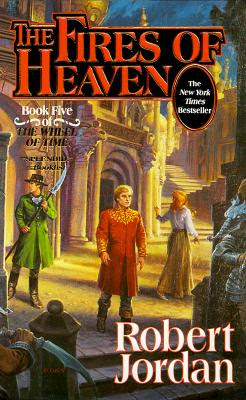 I am already inside the story and it is getting harder and harder to analyse individual books. All I can say is that, again, there are a lot of incredibly condescending and arrogant people, mostly women, which are presented as indomitable based on looks or appearance or prestige, yet with not a shred of usefulness. I was reading this book and I was finding myself daydreaming of what I would say to such an annoying individual. What I find even more disturbing is that a lot of times the superiority of one's opinion was demonstrated via violence. Educational violence, mind you, switching, bottom beatings or pinches, meaningless and hard chores, but still violence and hardly acceptable to me.

Rand and Mat go together in The Fires of Heaven, but their contact is almost not existent and Mat is always trying to get away. What happened to their long time friendship? It evaporated in Jordan's writings. Perrin has saved the Two Rivers, but then married and stayed there, as if the world was saved and there was nothing to be done about it. Eqwene is with Rand as well, but more Aes Sedai and more arrogant by the minute, her relationship with Rand abandoned since subjected to the conscriptionary methods of both Aes Sedai and Wise Ones. A horrid character, if you ask me. Morraine is even more mysterious and useless as in the previous books, except for the end, where she does something heroic, but kind of dumb. Rand is getting "hard", but still suffers the people around him as he could do nothing about them. A prisoner of his own small village upbringing, he seems a sad sorry character, as remote from heroism as a dung beetle is from a professional dancer.

Interestingly enough, I found the Elayne and Nynaeve story arch a lot more satisfying. Complex, reasonable and thrilling. That until they voluntarily return to the Aes Sedai, where they have to again suffer all the humiliations an Accepted is supposed to suffer to gain "character". A new female Forsaken appears, Moghedien, but not nearly as interesting as Lanfear, who is present in this book, but terribly inconsistent. The ending of the book also annoyed the hell out of me, since I believe her outburst was completely out of character.

All and all, as interesting and captivating as the others in the Wheel of Time series, but suffering from a kind of character sublimation, in which the story is being carried by people that don't act like themselves. Book 6 is on the way.

<p>Hey, Tony! I keep reading the books and I enjoy them. I am sure there is better though. If you have the time, sure, read it. It is a bit childish, but a good read nonetheless.</p>

<p>should i read the book anyway? all those bitchy lawyer-type women sound a bit pushy.</p>