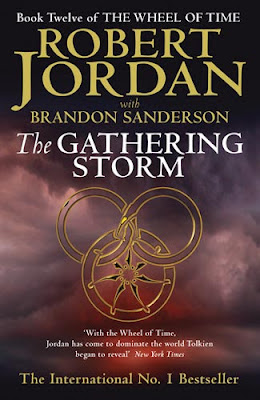 The Gathering Storm is the 12th book in the fantasy series Wheel of Time and the last in the saga to be written (partially) by Robert Jordan. The guy died while writing it and the book was continued by Brandon Sanderson. The result? A better book! I firmly believe that Sanderson is writing better than Robert Jordan, while at the same time retaining enough of his style to not feel too much of a disconnect. I wish I was a literary critic right now, so that I could tell you what was better, but I am not; as a reader I can only tell you that I felt less like crawling through thick fluid and more like swimming. There is proof: I've finished reading this book almost a week ago and, while not having time to write this post, I did get two thirds in the thirteenth book of the series.

Ok, I must admit that being a series finale, it was bound to be more interesting, however more focus on the action and less on Nynaeve's braid pulling helped a lot. The plot revolves more about Rand and Egwene and less on the others. Rand is getting more and more erratic do to his obsession for eliminating his emotions. Instead, he buries them within, causing more and more insanity. Luckily, he gets over it, and not by psychotherapy, either. Egwene, instead, having been captured by the White Tower, has been demoted to Accepted and forced to do chores and beatings in order to stop calling herself Amyrlin. She uses her enormous ego and Aiel teachings to overcome the hurdles and reunite the Tower with the unexpected help of Verin, as we finally learn who she was.

The story of this book is interesting in itself. It was supposed to be the last book of Wheel of Time, but then it grew too much and it was decided a split into no less than three other books. The initial target was 200000 words, but the final estimation reached 750000. That means most of the book was written by Sanderson. The reception for the book was positive, since many of the threads left unended in the previous books were clarified.

Right now I am almost at the end of the final published book in the series, Towers of Midnight. The fourteenth book is supposedly ending the saga and will be published sometime at the beginning of 2013. So in about 9 months it will all be over :-)

<p>I feel the same way about Peter F. Hamilton. Great universe, flawed writing. I was extremely satisfied with the Malazan Book of the Fallen universe, which pretty much revolutionizes the way stories are told. Also, I liked Feintuch's Seafort saga - Fisherman's Hope was the best book in the series - even if the story was the same in each book, slightly updated.<br><br>The reasons we like or dislike a book are not always the ones we tell ourselves. A book doesn't have to be written well, have a good story or satisfy some code of conduct, it only has to appeal to some part of us. Reasons we find immediately after, but once we started liking it, they don't really matter. I will read the final book in the Wheel of Time series, even if it disappointed me. I want to know how it ends.</p>

<p>The supposed fans can hardly call themselves discernible readers if the cannot acknowledge it’s deeply flawed. <br><br>Another favourite author I like is Robin Hobb with her The Farseer /Liveship Traders/The Tawny Man Trilogy’s and eventually her Soldier Son Trilogy which I gave up three quarters through the very last book in the series, (Renegade's Magic) It became torture to read I should have acknowledge at the beginning of the Soldier Son Trilogy that the writing was way of course and was depressingly boring, but like a true fan I soldered, sorry about the pun, eventually having to concede defeat and accept that she had lost it.<br><br>You’re not fan if you’re a blindly accept nonsense, story of Isaac hmm I’ll kill my son knowing full well I shouldn’t.</p>

<p>Wow, what a blast your comment was. I partially agree with you, while I am not so vehement about it. The particular fancies of Jordan's did spoil quite a large portion of the book and logic is hardly applicable to the story. Yet, how fond people are talking about these books... I can't help but wonder if any writer could be both prolific and sane.</p>

<p>When I think of Robert Jordan the words childish nonsense comes to mind; a man who dreamt up a great idea but had an inadequate imagination to fulfil it. I doubt if the word spanked and bottom have been used so frequently even in S&amp;M literature. Apparently this is what the women in all the various cultures from the series do to one another, well almost; like that makes for a sensible believable female interaction.<br><br>Brandon Sanderson unfortunately continues with this nonsense, Egwene al'Vere gets has backside thrashed perpetually, what utter tosh, truly.<br> <br>It makes you wonder about the 5 star rating system in books. What I mean is when the series began it was pretty good with the first four to five books around 4 stars but then they go downhill drastically to 1-2 star yet people who were rating good books 4-5 stars still give the same star rating to totally inferior writing.<br><br>The main reason the series deteriorates so drastically is Jordan devotes so much text into his ever increasing female character list. Just pick up any of the later books of the library shelf and have a squint at the pages that involve the female characters, it is honestly the most cringeable writing imaginable. I sometimes suspect that his wife took over these sections because they are completely clueless and lack any true content or pace, the writing is reduced to idle chit chat.</p>