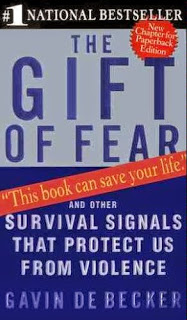 The Gift of Fear has popped up repeatedly in my field of view, recommended by multiple sources. I started reading it and at the beginning I thought it had a nice concept: the systematic study of violence perpetrated by people, written for reasons of protecting ourselves. However, Gavin de Becker has a writing style that got to me really fast. He sounds like he is the lecturer in a police conference, and half of everything he says is just marketing for the bits that are going to come next. You know the type: "I will reveal to you the secrets of the universe, but before I do that in one of the next chapters, let me tell you a little story". I mean, what he is saying makes sense, but he oversells it so brutally that I could not continue reading past the half of the book. You know, he sounds a lot like Walter O'Brien, the guy who's life is supposedly the basis of the TV show Scorpion. He doesn't sound like the O'Brien on TV, but like the actual guy, always overselling and overstating everything he allegedly did. Also the little anecdotes are useful in the book, but his explanations are so over the top. Man!

Anyway, the things that I chose to take from the book is the JACA system for assessing threats and the fact that when your intuition is telling you something, it either means it has access to some data that you are not conscious of or that it malfunctions and in either case you need to pay attention. The JACA system is about someone being more of a credible threat if they pass four tests. J: they feel Justified to harm you. A: they feel that they have no Alternative to violence. C: they believe the Consequences of violent action will be manageable. A: they believe they are Able to do you harm. Of course, that immediately makes someone believe that the first step of counteracting such a person is to convince them they are not justified, which fails on so many levels, especially with an antagonist.

The book covers all kind of violence: rape, murder, stalking, assassination, road rage, office vengeance, domestic violence, even violent children (I haven't gotten to that part). I can imagine how this book would be very useful to young people, scared women, maybe even children, but with the language being so pretentious and the guy making it all sound like a marketing pitch, I doubt it would be accessible to any of them. Let me reiterate: I believe the subject of the book is a good one and it should be addressed. I also don't criticize the conclusions that Becker reaches or doubt his professional experience. What I am saying is that the way the book is written stylistically made it unreadable for me. So instead of reading a few pages every week, I've decided to stop reading it. Sorry, Gavin! I only wish someone would make a short summary of it, since a lot of the stuff there is at least interesting, if not downright useful.