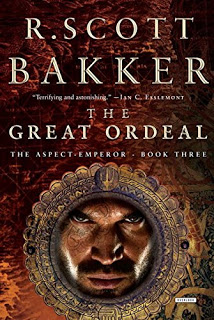 I have read all the Prince of Nothing books and the first two of The Aspect Emperor, in truth a single large story rather than two separate series. I am amazed of how many details and human truth could R. Scott Bakker stuff in the books and I wrote in the review of The White Luck Warrior that I was in withdrawal after I realized the next book was not published. Therefore my strategy was to wait until this and the fourth and last book in the series were published. Which is both a blessing and a curse. I had to remember what the hell happened "before", though the book has an intro in which is tells the story up to that point which I found very useful. I was also detached from the story and characters.

With that being said, the book felt even more like filler material. It mostly covers a rather boring part of the Ordeal, Esmenet and the story of a now more interesting Sorweel. Yet throughout the book I felt like the author was struggling to push meaning into less and less interesting concepts by his overuse of italics and very detailed introspection. That is both the general flavor that makes the series so good and the bit that sometimes made me want to fast forward. Kellhus is almost absent, like in the previous book, which is strange for a series called after him, but there is also less action. Or at least less from characters that I enjoy reading about (there is a nuclear explosion in there and large army conflicts, but again they felt like filling space). I was disappointed with the short and empty solution to Ishual, considering the largest part from the previous book was about getting there and towards the end there is an interaction between a Dûnyain and Qirri that left me in a "WTF?!" kind of state. On the bright side, a character that I enjoyed a lot reappeared as an agent of the Consult. That was fun!

So I am overly glad that I waited for both books from the series to get published so I can now get at the meat of the story (praise the meat!). I may have given you the impression that I didn't like the book, but I was merely comparing it with the rest. It is still a damn good book, however I am the type of guy to focus on the negative, so that is that. If I were meeting my past self, the advice I would give would be to read The Prince of Nothing and The Aspect-Emperor back to back. Oh well, that ship has sailed.