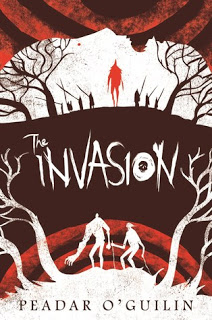 The Invasion is the second and probably final book set in the Ireland magically separated from the world by the vengeful Aes Sidhe. Just like The Call before it, I finished this in just a few hours, both because it is a compelling book and because it is short.

In The Invasion,Peadar Ó Guilín delves deeper into the machinery of "The Nation", as the state of Ireland names itself. It is impossible not to see parallels with the historic struggle between Irish and English peoples, but if the world in which the book take place is a metaphor for that, you have to ask yourself who represents who? The Aes Sidhe have been banished by people who stole their territory, so maybe they are the equivalent of the Irish. I think that is more about how people and nations behave under the stress of conflict and ultimately end up making the same mistakes and atrocities.

While I loved The Invasion, I believe The Call to have been much better, mostly because at the time it was fresh and unique. And while I enjoy explorations of human nature, I wanted more of the Sidhe. While the story kind of ends with this book, it is not impossible to write more books in the same universe, what with the prequelitis virus going around but also continuations. I doubt it, though, and that makes me feel both relieved and frustrated. Bottom line: There is no reason to not read the two books in this series, as they are imaginative and well written.