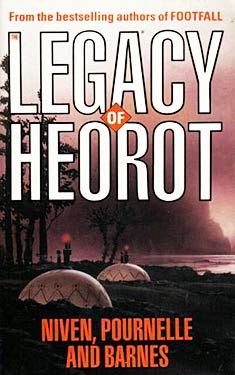 The Legacy of Heorot is a good sci-fi book, part of yet another trilogy: Heorot, written by no less than three authors: Larry Niven, Jerry Pournelle, and Steven Barnes. You've heard of Niven by way of Ringworld, the others are no first time writers either, but I have frankly never heard of them.

The book is about a colony of people on the fourth planet of Tau Ceti. They call it Avalon and the colony Camelot, declaring their ideal of an honest equalist society that has the good of the people at heart. But of course, as the title of the series suggests, the plot moves towards the story of Beowulf rather than any round table. In face of doom and disaster, people tend to go through standard phases, starting with denial, while any façade of equality and reason quickly crumbles.

And this above paragraph pretty much details the subject of the book as well as the reason why I was partly disappointed with it. I was afraid that the story would be yet another actualization of the myth of Beowulf, which would have bored me to hell, but it wasn't. Yet it wasn't really a strong psychological or social commentary either. More of an optimistic view of the first human interstellar colony. Like any government or corporation would spend a whole lot of money on a space ship, in order to send it to another planet and then made it a present to the crew of the ship, fire and forget like. (See how I start and finish sentences with "like", I'm pretty rad, huh?) And all the people there, selected by a well designed process, would be nice and intelligent and having no social pathology at all.

But the book is nice enough, regardless of my bleak and neurotic projections. It focuses on the planet's (very simple) ecology and the way the colonists interact with each other and fight for their prize. They have colonized a small island in order to minimize threats, but there is a huge unexplored continent waiting for them, therefore the trilogy. It was nice, though, that the first book is rather standalone. If you choose to read it and you do not want to continue the series, there is no hook at the end, it just satisfactorily finishes all that was started.