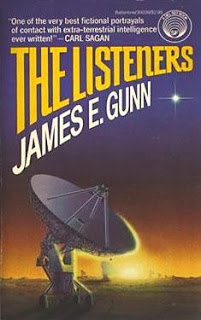 As always, this post will reflect my personal opinion. I know that The Listeners is a classic book, one that has been cited by SETI as a major factor in the project becoming known and supported by others. I know that at that time, doing a reasonable sci-fi book was a feat. I know that the writer was a believer in the contact with aliens and human nature and so on, and thus he must have been a nice guy, with similar desires to mine and other space-looking people. However the book annoyed me to no end.

The first and biggest of all problems is the insistence of the writer to add to the book all kinds of quotes from various works, many of them in a foreign language - that is, other than English. It was the reason why originally publishers refused his manuscript. Now, even if I understand the language, I don't know the quote. There is an annex at the end of the book that translates everything, but really, when a character randomly interrupts a perfectly good conversation to spout something unintelligible in another language, that guy is an asshole!

Then there was the construction of the book, the Project being presented like something that held sway over the human heart. All you had to do to convince anyone of anything was turn on the speakers so that they hear static, while the main character would do PR work, knowing exactly what to say to manipulate the other person. I would not have a problem with that, if the manipulation would not be completely obvious and most of the time completely ridiculous. It felt like a Naruto episode where the other ninja, filled with power, suddenly decides to switch sides because Naruto is such a nice guy. I know I don't inspire confidence when I compare a classic sci-fi book with a Japanese manga, but for me it was the same quality of work, which may be entertaining, but not great.

All the people and events changed in order to conveniently support the plot. It felt fake and it is a lousy writing technique, more suited to pulp. I did not enjoy that.

As for the plot itself, it is about this Project, which is pretty much SETI, that suddenly receives an alien signal piggybacked on 90 years old radio transmissions. What people do and say is so underwhelming that it felt like I was wasting my time while reading the book. That is why it took so long to finish it. My conclusion: while a classic for the science fiction genre, I did not enjoy the book or empathise with its characters. The plot is difficult to swallow and the story is very dated. I would not recommend it.