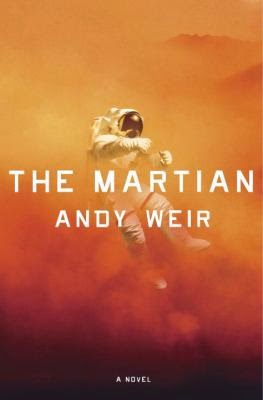 The Martian is a short and easy to read book about a guy being abandoned on Mars by mistake. Andy Weir writes most of the book as the astronaut's log entries, but in a colloquial and funny way. I started reading the book since there are a lot of people that praised it and there is also a Ridley Scott movie being made from the book. I hope it won't suck (*cough*Interstellar*cough*).

What I found really appealing is not only the subject matter and all the science and engineering involved, but also the positive attitude of the main character in the face of adversity. All that science and engineering was cool too, though :) and presented in an easy to digest way (there are no equations anywhere :-P). After a while it becomes difficult to suspend disbelief since there are accidents after accidents and Mars really is being painted as the bad guy, trying to kill the protagonist, yet he always finds a way out of the problem at hand. I mean, if they make the movie follow the book, they need Matt Damon in it just because he has all that Bourne training and he needs it to survive the set. Yet one cannot help rooting for Mark Watney, anyway. There are some politics involved as well, but not that much; basically NASA is presented as an organization of scientists that want to get the job done, even if some are more cautious than others.

In summary, I think this is a book that any space geek should read. I finished it in two days, so it's not really a waste of anyone's time.