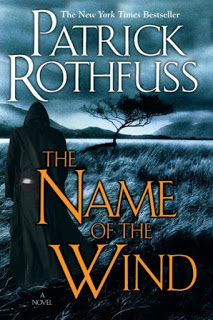 The Kingkiller Chronicle series seems to be, for once, an actual chronicle. In an inn in the middle of nowhere a guy actually called Chronicler comes and starts writing the stories told by the innkeeper, in reality a famous hero that just wants to be left alone. The whole thing feels like it was meant as a study in storytelling, as we read the telling of a story in which many times people tell other stories and concerns a character raised as a travelling actor.

More than that, the "shape" of the plot is a standard hero journey: young orphan boy with extraordinary abilities battles various types of evil as he grows into a popular hero. He is so talented, in fact, that he feels a bit of a Marty Stu when almost everything he encounters is extraordinary and within his ability to control or at least get out of jams with his legend intact. There are hints, though, that as it is told, the story will become more tragic. Also, as told by a talented storyteller, a reader might be circumspect of all the details in it; while improbable, it might all be revealed as a great joke by the end.

So, is Patrick Rothfuss just writing a nice bedtime story where the hero is all smart and strong and filled with magic, something to spread like wildfire and be sung in all taverns, making him a ton of money, or is it something more to it, like trying to teach the reader something that is impossible to teach? That is for the reader to decide.

I read the book really fast for its size, which shows my own preference for it, and it reads like a kind of Harry Potter in Westeros. Unfortunately, the pace of writing is borrowed from George R. R. Martin, rather than J.K. Rowling and people are still waiting for the third book in the series, more than 10 years since the writing of this one. One might want to wait until the entire story is told, as the second book in the series is a simple continuation of the first. The Name of the Wind just ends at a random moment in the story while The Wise Man's Fear continues the telling and also ends randomly. A lot of people that fell in love with the story are now frustrated with the lack of progress in writing it it. After all, Kvothe is telling it to Chronicler in three days in an inn, written by shorthand in ink, while Rothfuss has used computers for a decade already.

Bottom line: this is a well written series of rather large books. While the character feels a bit OP, the plot meanders through many interesting concepts and situations. I still have the strong suspicion that Patrick Rothfuss started writing this as a study of storytelling - an art that precedes writing and blends together artistry of composition and its declamation - but somehow ended up stuck with a character that is young, powerful, good looking and can't carry him forward. It is worth noting that while Rothfuss only wrote two major books in the series, he also wrote intermediate stories and other writers also contributed to the Kingkiller universe.