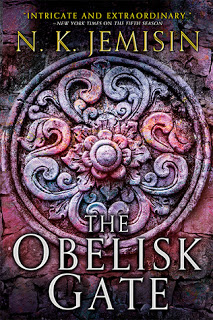 The Obelisk Gate immediately follows the story from the first book in the Broken Earth series, The Fifth Season. N.K. Jemisin now makes clear which are the sides in the conflict and, with the characters thoroughly fleshed out in the previous book, she is free to let things happen, to finally feel there is a story, and a root cause and a purpose and some action. That is why, in many regards, even if it is just another part of the same story, The Obelisk Gate is the better book.

Unfortunately for me, I won't be able to read the third book, The Stone Sky, until it is released and then... err.. made available, which happens sometimes in August of this year. Yet at the same time I have to say that there was enough in this book to appease my desire for more Broken Earth. I may even not read the third book, even if I am curious on how it will all end. It is an important lesson to learn, that stories can burn themselves out before their time, just like an orrogene using too much power and dying of it. Somehow, at the end of Obelisk Gate there is not enough mystery left but what was so bluntly left out by the author with all the silent and "I'll tell you just enough" type of characters she used. I have to wonder if there is even enough material for a third book. The fact that there is a 2014 short story that seems to happen long after the third book makes me think that it was always planned as a trilogy and this will probably be it.

Bottom line: The sides become clearer, characters align with them and a lot of the education of normal people is being discarded in favor of the brutal way of thinking in case of terrible cataclysm and dire need. There is still a climax to come, but what will it entail except the obvious outcome and some fighting? To me, the important part of the story has been told already.