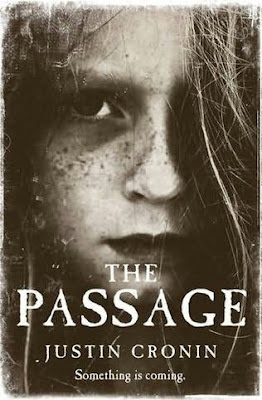 I started reading The Passage because of an Internet review. It was so exuberantly positive that I thought I would have a great time reading the story. It said "I don’t think I’m exaggerating when I say that almost everyone has heard about The Passage by Justin Cronin by now. At least the people in the booking world have." The only explanation I have now, having read the book, is that the reviewer is a bookie and they have some sick sense of choosing what they read. Ok, I am a little mean. Truth is that other people that I respect have blogged about the book and recommended it; I just can't fathom why.

Partly to blame is the writing style. Justin Cronin needs to make you understand what everyone is feeling by describing the most mundane parts of their lives and what they experienced. It's not the good type of description, where you get to know the people because of their thoughts and actions, it's just a lot of internal monologues on subjects I couldn't care less about. I feel that a good book is the one that contains mostly ideas relevant to the subject of the book and most of what these people thought or did was not. I am not very good with other people's feelings, so I thought it was all me and I continued to read through the book as a virus from South America that made people into blood thirsty immortal creatures was brought in the US in order to study how it could be used to create weapons. Not the best plot device ever, but I was already forcing myself to suspend my disbelief. (Cronin, that was your job, not mine!) Naturally, the virus escapes containment, unleashing chaos and destruction on the face of the world. I was a third into this rather long book when all the characters so painstakingly described disappear. They all die. Fast forward almost a century later. Now you see my dilemma? How can that be good writing?

Anyway, now people are living inside a high walled colony (because vampires can't enter a makeshift colony defended by lights and crossbows, but they have defeated armoured vehicles and military bunkers) and believe themselves to be the last remains of humanity. All 100 of them. I have to, again, read all about the feelings of people and how they see themselves and the world. Here we get some chapters extracted from people's diaries that are presented at some future outbreak conference. So, halfway through the book, we know it will end well. In case I was starting to enjoy the story. There are some heroic characters around, they do heroic stuff, then, another third in the book, they leave the colony. About a dozen or so. They go through vampire infested territory, losing a few people and the opportunity to know how they felt about it, and find out some important information on how to defeat the vampires. They were not the only remnants of humanity, no, humanity was nice and well fighting the vampires in the most ridiculous and inefficient manner possible. So, after completely removing another 95% of all the characters we got to know uselessly, we have a Mad Max kind of ride to other people. Lucky for me, these other people were pretty much empty plot devices so I didn't get to know how they felt one way or the other. Blessed joy!

At this point I was barely containing my impatience for the book to end. Some sort of bloody resolution to the mess I had read until then. They kill a master-vampire, they get a powerful version of the virus that makes people hybrids and retain their memories, they use a nuke! Wonderful. Then some idiotic woman decides she knows what is best and makes a completely unilateral decision based on "humanity" which pretty much dooms them all and separates the main character from his love forever, but they all accept it as "what should be". Fuming with frustration, I speed it up in order to get to the end of the book, mere tens of pages coming. And it comes. With a little religious crap and a sort of lame cliffhanger and a complete stop. Guess what? It's a bloody saga! See the book cover, there is more coming!

So I am sorry, Axe! I am sorry, Wertzone! I hated the book. It was as pointless as it wasn't making any sense. Maybe the guy can write, but I couldn't notice it because of all the ridiculous premises of the book and all the feely descriptions. I will not read the rest, I will not recommend this book and, if for some strange reason OMG, everybody is talking about this book, tell them you read it here: read something else!