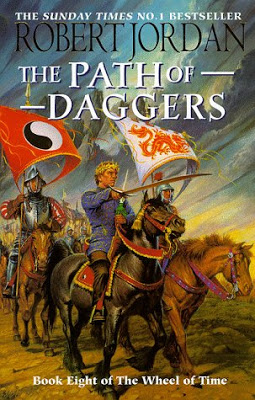 The one word that comes into mind when I think of the book is "frustrating". Having abandoned any semblance of independence between the books, Robert Jordan continues in The Path of Daggers many of the story arches began in A Crown of Swords and I don't know if he ends any. All the characters are acting like proud chickens, lacking any thought. They are emotional, weak, playing games when important issues are at stakes, taking serious offence from irrelevant words. I am sick of people "educating" others via beating, switching, shaming, pompous posturing, power plays and torture. The fate of the world is at stake and each and every one of the heroes of the story act like they still have other options. And while they are disgusted by people doing that very thing, but not seeing it in themselves.

At this point I am left with no other choice than to "watch" the story unfolding like on TV, because I feel no connection with it whatsoever. My wife asked me which of the characters in the book I most identify with. And I couldn't think of any. Even Shai'Tan doesn't make any sense at all. I've already started Winter's Heart and it continues in the same way.

<p>This is exactly why I don't think I'll ever read this series... Bummer!</p>