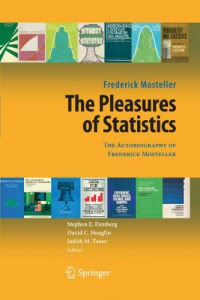 I was looking for autobiographies, since I liked quite a few of them lately and I felt like more, and so I got two. One is interesting because it is finally in print after 100 years since the author's death. I am talking about the first volume of Mark Twain's biography. However, I really could not make myself read it: the language was so pompous and the content so lame that I felt pain trying to.

Not so the second book, which seemed even more unlikely for me to like it: THE PLEASURES OF STATISTICS: The Autobiography of Frederick Mosteller, but which I did. It started with a few projects that Fred Mosteller participated in, explaining the day to day concerns and situations of a statistician while working on them. I thought at first that the book is going to be all like this, so after about a third I was about to abandon the read. You see, it was all very interesting from a professional statistician's point of view, but I wanted the more personal viewpoint of the man. And so I got it. Suddenly the book changed pace and went with the early life and education of Mosteller. The end of the book again covered some cases of work, but this time with a personal touch that explained the motivation behind the acts. And finally, the editor's epilogue, written from testimonies of friends and colleagues.

In this review, a Theodore M. Porter argues that the autobiography was flawed, as it covered little of his family life and couldn't reconcile the different viewpoints that appeared in the book, like the scientific and personal. But I disagree. The autobiography was unfinished and I guess the editor did the best he could with what he had, but it couldn't have been a lot different from what Mosteller himself intended. You start with the actual work: statistics, explained in layman's terms, then you continue with the actual man, explaining the origins and education, then you get back to statistics, but examining the work from the personal viewpoint of the man described. Yes, he could have written about his family more, but it wouldn't have been about statistics. The little he does write about his wife is about how supportive she was throughout his career. And yes, the tone of the book is a bit clinical, but this is how the writer actually thought like; he was a scientist in the true sense of the word and I liked this book exactly because it made me understand how such a man thinks and feels.

Even more than the structure of the book and the insight in the mind of a conscientious and brilliant scientist what I liked most is the peek at the world in the middle of the 20th century and how strikingly different it was from what we see today. The concerns of a teacher towards the best method to get his students to understand and like the subject, the way people were getting together to solve problems and worked for years on a book or bunch of science papers, the way academia was also supportive, not only political, and most of all, to see how people can be both brilliant and empathic, both clinical in science and warm in person.

I wouldn't recommend this book to everyone. I had a hard time reading it to the end and paying attention to every bit. Nor should one study it like a school manual, because as far as I see, the book is about a man's soul and you only have to understand and feel that. Whether it is because of my autobiography fad or because I resonated with the man or for some other reason, the bottom line is that I enjoyed reading the book. Maybe you will too.