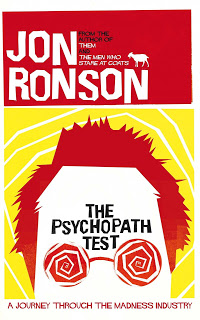 I thought The Psychopath Test was not extraordinarily well written, but I enjoyed it. Imagine Jon Ronson, a tiny overanxious journalist and writer, going around the world to discover who are these psychos, what are they and who made or declared them thus. At times he has to make a connection with people who have violently killed or tortured others and I feel like only Woody Allen would make these scenes justice. A movie adaptation has been announced in 2015, with Scarlett Johanson in the main role and written directed by someone I don't know. What role would that be, though? There are no lead female characters in the book, although there is a woman who was caught in a bomb blast and then had to defend she even existed to a bunch of asses.

Anyway, what threw me off a little was the article/blog style of writing (called gonzo). It's not bad, I just wasn't expecting it. It feels like Ronson wrote several articles, with some overlaps, then glued them together to paint a larger picture. The result is an image of various widths and with some holes in it rather than a smooth picture. It does feel more personal, though, and perhaps this is what it should have been all about: the journey of a writer, hence journalism.

The book is not large and it is easy to read. In it we learn how psychopaths behave, why they are different from the rest of us, who created the rules used to spot them and, coming full circle, wonder if any of it is real. I think it was informative, but there are probably a lot more things to be said on the subject. As a personal journey to discover the meaning of psychopathy, it's a good book.