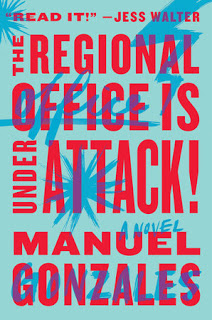 There is a rule in writing, that if you are trying to tell the story from the viewpoint of another character than the main one, for example the villain, and it is boring, then your story is not good enough. It seems to me that this was the cardinal rule that Manuel Gonzales used to write The Regional Office Is Under Attack!. He wrote tiny interlaced chapters that alternately were describing the action, then the motivations and personalities of the characters through flashbacks. At first it felt fresh, then it just got annoying. There is only so much you want to hear internal monologues.

It would have been great if the story would have been better, or if the characters would have really been fleshed out. However, this book feels more like an exercise in writing, a funky experiment, than a real story. There are very intimate details about how people thought and why they did some things, but they also are empty, doll like characters. And that is too bad, because Gonzales is clearly a talented writer and the plot made me want to read on and find out what will happen to all the characters, only to be left high and dry at the end of the book, which stopped abruptly and spitefully. It was like "Hey, you wanted something else than to experience my new idea? Fuck you! You get nothing."

In the end, it was something that felt like a fairy tale, reinvented for art's sake and modernized just because it's fashionable. It's not even a first part of a series or something. It's a standalone book that showcases the author's idea of presenting many viewpoints on some incidents that have only marginal connection to science and fiction. It could have just as well been a soap opera about highschoolers and be just the same book. It wasn't bad, but I can't quite recommend it either.