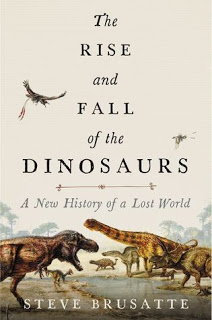 When I was a child I was obsessed with dinosaurs. I was going through the pages of the Zoological Atlas again and again, looking at the big lizard like monsters and memorizing all of their names. If I would have had access to a book like Steve Brusatte's, I would have probably become a paleontologist! By that I mean that the book is good... for an eight year old or for somebody who is already giddy with the prospect of reading about their favorite subject. Now, decades later, I really made an effort to enjoy The Rise and Fall of the Dinosaurs, but it had no wow factor anymore. The plethora of names that I haven't known about when I was smaller than a toddler did not bring me joy. Hearing about feathered dinosaurs and what is the most likely reason feathers evolved at all or how they dinosaurs turned into their modern day form - the birds, even the tales about the dwarf dinosaurs found in my own homeland merely made the book bearable. Having a long chapter focused on Tyrannosaurs and having my book reader stop after each T. in T. Rex didn't help either.

My verdict, therefore, is that it is a good history book. It is well written and the passion of the author is palpable and admirable. Yet, unless you either know nothing about dinosaurs or you already love them, you won't read anything really amazing or new. It is, quite literally, a history of how dinosaurs rose and fell and it feels like reading a history book. Somehow, I was expecting more, something that explored in depth a lost world, but in fact it only made clear how little we know and how tiny chances are that this will ever change. Instead of the feel of a lush green world where danger loomed and beauty abounded, I got a dry dusty look at people digging in rocks for small hints of that world. It was like looking at shadows and trying to figure out what made them.