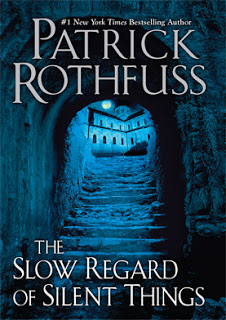 You might wonder what a fractional number in a book series means. For some authors, it means books that are part of the universe, but not of the story, inbetween events that are defined maybe just chronologically. For others, it's even less, short stories that bring completion to their vision, different in scope, style and/or characters from the main books that maybe made you find and read them.

Unfortunately, The Slow Regard of Silent Things is part of the latter category. It is a short story about a few days in the life of Auri, the autistic-like little girl that Kvothe meets with occasionally on rooftops. Patrick Rothfuss even tells about how he came to write the story and fear people will not like it: it has no real narrative structure, it shows only boring things, like eight pages of someone making soap, it has only one character and, I assume, people will get angry for wanting more of Kvothe storytelling and getting dumb little Auri instead. And he was right. I am actually a little bit pissed.

The Wise Man's Fear was written 7 years ago! If you want to do a bit of experimentation, make an effort to name it such: "A silly little story that happens to take place in the Kingkiller universe" or "The Kingkiller Chronicle #2.001" or something like that. Instead he brings hope to readers that it's some sort of companion book, a proper bridge between the second book and the upcoming one, then smashes it with his prissy pen.