I have very fond memories of the games Star Control and Star Control 2, played on my PC when I was but a wee boy. They were DOS games released in 1990 and 1992, respectively, and were absolutely marvellous: large universes, with many star systems, each of them with planets and moons; many alien species which were strange and funny and obnoxious; storylines that were both absurd and very captivating. I had a great time.

I want to open a parenthesis here and talk about the quality of games back then. Click here to hide the following rant, if you are not in the mood for it. I really have no idea how the PC game market was working in the US, but here in Romania, there were very few PCs, no Internet and the distribution of games (all pirated) was done via friends who would recommend and share what they thought was great. There were no walkthroughs, rarely any printed maps or special instructions (since they were not original games) and the only way to finish up a game was to actually play it. Sometimes it got frustrating enough that after hours of trying to find something, you would call friends and ask them what they did. I can only imagine that even in a country were they were a lot more computers and games were bought, rather than copied, the game play situation was similar. In other words, the relationship to the game played was personal: someone that you know and respect came to you and recommended the game. This was the only thing that made you play it other than seeing the cover in some window and feeling like you have to try it. Also, not having any Internet (or very little on it), you would not have access to many reviews and neither to game updates, if something was wrong in the game. And you also have to think of the state of affairs in software programming: every software firm was basically a gang of enthusiasts inventing and trying their own way in which to build software.

Yet, a lot of the games back then were great. Not all, maybe not most, but certainly the ones reaching me through "the grapevine", probably because the bad ones would be filtered away. One has to ask oneself how games back then required a number of hours of play orders of magnitude larger than present ones. How their stories had the complexity of movie scripts (often a lot better) and so much intricacies like alternate game modes, humour and so on. And the answer is, of course, the Internet. Once the gameplay is too complex, players swarm to online walkthroughs, often in video format, to tell them what to do. Atmospheric gameplay where one has to walk for hours to find something are considered antique and wasteful of time. And of course, if they are not social enough, they aren't even worth playing. The advertising is done via the web, with "stars" or other such whimsical method of rating a game, often resulting in simplistic orgies of graphical design with repetitive action as the only thing to do, humour provided by caricaturesque icons of birds or zombies.

That being said, as a software developer myself, I played The Ur-Quan Masters for only two days, using said walkthroughs and being nagged by the wife and dog for not spending time with them. I also had moments where I cursed the necessity to move towards a planet or a star by actually waiting until the ship got there, and often by manually controlling the craft to reach there. Also very annoying was to manually look for star names, until I downloaded the map from ... the Internet. So I am not just a geezer that hates the new, all melancholic about the past; the present has its boons... few as they are. Anyway, to the game! 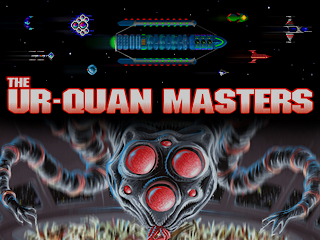 In 2002, ten years after its release, the makers of Star Control 2 made released the source of the game as open source. Maybe this should be heeded by other game and software makers: create a copyright licence that voids itself ten years after the release of the software. The world would be a better place! Anyway, some people decided to port that to different platforms, including Windows. Now I know that DOS and Windows are made by the same company and that the port sounds easy, but you should look at the bugs for this port like 'Not thread safe' or 'Not safe for 64 bits' and so on.

Accidentally I found out about this port for Star Control 2, called The Ur-Quan Masters. Why was the name changed? Because even as the source code was free to use, the name was copyrighted. Weird, right? I installed the latest version (0.7.0.1 - you gotta love these open source versions that tend to reach 1.0, but never do - a bunch of perfectionists, all of them :-) ) and I couldn't start it. It threw an error no matter what I did. In their defence, I was trying to play it on an Athlon 2500+ processor running Windows XP (I know, geezer!). But I did manage to install and run version 0.6.2, which seems to be working on my machine. This is part of the motivation for writing this post, since I found no one on the Internet complaining about the same problem as me. I did try all the compatibility modes for it, BTW, and it didn't work. Maybe I should have tried running in Windows 98 (yes, I still have that installed as a secondary OS).

You see, the plot is that you are the descendant of an exploration mission that was never picked up from the planet they were supposed to investigate. They did find an ancient alien starship factory and managed to build just the skeleton of a ship to send you back to Earth to see what had happened. Getting there you find the Earth encased in an impenetrable shield with an orbiting station around it. The crew of the station tell you the story: alien race called the Ur-Quan came for enslaving all sentient races, won the war and gave earthlings two choices (well, actually three, if you consider total annihilation, but let's not get technical): join them as their slaves or relocate all resources to Earth and be trapped under the slave shield. Humans chose the latter. Now, your mission is to find alien races, make them join you in defeating the Ur-Quan and ... well, defeat the Ur-Quan. You have to do that by exploring amongst hundreds of stars, each with their own solar system of planets and moons. You get fuel and extra modules for your ship at the human station, but you need to bring materials (minerals) in order to get them. Minerals are gathered via manual missions to the surface of each planet and moon, while fires, lightning, earthquakes and alien lifeforms are attacking your landers. Aliens are diverse and most very funny: a cowardly race that speak like Italians, an evil spider race, a sexy race called the Syreen, warrior type race (that is weak and stupid), automatic probes that declare their peaceful intentions then attack you, mean spirited aliens that consider all harm done to you as a practical joke and so on. There is even an Emo race, although the term became popular a long time after the release of the game.

Oh, the memories! The vibrating music originally thought for PC speaker or maybe AdLib cards brought back feelings of old. The witty dialogues and the immersive nature of the game made me relive a lot of past pleasures. Unfortunately, as I was saying in the rant above, there was a lot of immersion that I really didn't want, like waiting for minutes to get from a star to another, then manually navigate to reach a planet or moon. I couldn't help thinking as a software developer and consider how I would have done the game - of course, online, in HTML5 and Javascript, and actually it wouldn't be so hard. Playing the game I realised how different the perception of time was then compared to now. It was obscene how much time I had back then, and completely devoid of responsibilities, too.

Well, because of the time constraints I quickly hacked the game, added infinite money and proceeded to finish the game using a map and a walkthrough. I also was unable to finish the game due to two bugs: one where the Spathi should have given me an Umgah Caster and did not, and another where the Mycon were supposed to go to Organon and did not. Even so, it took me two full days, about 16 hours of gameplay. Anyway, I was close to the finish and I did watch the ending on YouTube (how nouveau of me! :-( ) For the people that loved playing this game in the past, maybe you should try it again. Old memories often bring complexity to present perspective. And for those who did not know of this game until this post, maybe you should try it, see what people of old considered a good game, even if they played it on 33Mhz 386 PCs with 4MB of RAM and 120MB hard drives.

Also, there is another attempt for a port to Windows from the same source called Project 6014, for some reason. I think it stalled, but maybe it brings some surprises to the table.

I leave you with a YouTube video gameplay by some guy (frankly the first I did find) if you are unwilling to take the trek yourself.

Thank you for leaving a word, Damon,. That is certainly good news! And maybe later, sequels? Games lately lack that geeky sense of humor I grew up with. I miss it.

Project 6014 Lead coordinate/artist here. We hit a few snags and stalled, but we&#39;re back up. You might also be interested in Ur-Quan Master&#39;s HD too. I&#39;ve re-made all the art (30,000+ images), and increased the resolution. Added some nice new gameplay features too. You can play with the original graphics, or in &quot;HD&quot; mode.