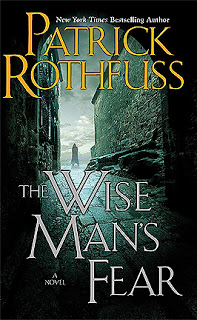 As I was saying in the review of the first book in the series, The Wise Man's Fear just continues the story began in The Name of the Wind and also ends randomly. Kvothe becomes even stronger, learns more things, is deflowered by the magical equivalent of Aphrodite and starts killing people like a maniac, yet his trials are still minor compared to his powerful abilities. As in the first book, most of his serious problems stem not from him searching for the most powerful and cruel immortals on the face of the planet, but from how much money he has in his pocket. This gets a little tiresome, but in this book we get a lot more, as Kvothe visits other places, learns to fight and adapts to strange customs in foreign lands.

There are two parts of the story that are just skipped over. One moment our hero is preparing for a long journey, with detailed descriptions of the equipment he caries, the next he is at his destination sans equipment, due to pirates and other dire circumstances that are skipped in a few paragraphs. Later on it happened again. Somehow, Patrick Rothfuss seems a little frustrated with his own speed of writing the story he has in his head. OK, that was a bit cheap, but also a bit deserved while we are waiting for the next volume.

Other than that, it was hard for me to consider this a book. It is a mere part of a longer book that would have been too unwieldy to read if printed in a single volume. It starts where the other ended and it ended with no real finality. While there is a geographical distinction between the first book and this one, it is a minor one. I still suspect that Rothfuss was planning something else with the story than what it turned out to become. Will the continuation of the story try to turn meta on storytelling, or will it continue just like a chronicle? Will the story ever reach the point when it is told or not? Frustrating questions that only a yet unpublished third volume will be able to start answering.