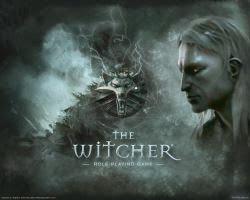 You have to appreciate The Witcher for at least two major reasons: one is that it is based on a series of books by a Polish author and second is that it is made almost exclusively by Polish programmers and software managers. It is basically Polish software, and for that the quality is really great. Not that I disconsider software coming from the country, but I imagine they have a lot less resources than major American game studios, for example.

The story is that of a witcher, a monster slayer. He has tremendous physical strength and can use magic thanks to magical and genetic changes that have transformed him into a sterile mutant. He is basically the Caucazian version of Blade, if you want. I have not read the stories, but from what I've heard they are rather morally ambiguous, featuring the witcher drinking and whoring like a madman in between monster slaying bouts. The game attempts to do the same thing, of course with the sex and foul language removed, as it would have been too gruesome among all the blood, gore and violence. (I was sarcastic there, in case you didn't see it, people in charge with the moral development of our society!)

In fact the concept of the game is marvelous: have a character that can make choices that affect the overall story in a fantasy game of feudal monsters and courtly intrigue. However, in order to do so, you must go on endless quests gathering this and that, running around like a marathoner on steroids (which I guess you are, with all the genetic alterations and potions). The poor guy runs so much that one gets tired just watching him move. That was the major issue I had with the game, over 70% of it is running around (and 10% animations).

The fighting style was intriguing, but ultimately annoying. You had to click on the monster you wanted to kill, then wait for a specific moment when the cursor changed in order to click again and perform a combo. Up to six clicks can build a combo, which gives the player a lot of opportunity to click on somebody else, click next to the monster or move the camera in a way in which it is temporarily impossible to fight. Also Gerald does not have automatic fighting, so unless you tell him to attack, he just sits there and takes it. The damn clicks make you feel you are doing something, though, which I guess is a plus.

You get to meet a lot of damsels in distress which you have the option of helping. Once you do that they are remarkably willing to discard their clothes for you. In that situation you get to see... a nicely drawn card of a partially naked woman representing the sexual act. Then you return to where you were... at the same hour... dressed... which makes one think of a problem with the witcher's endurance, so to speak.

The changes in storyline are interesting, and some of them don't seem to happen until they have had time to propagate. This means you cannot just save, make a choice, see what happens and load, as there is a long time between choice and effect. This also means you will have to play the game a lot just to see only one story line. You will probably have to Google for all the outcomes. I, as always, was a perfect gentleman. No matter how ugly that Adda chick was, I still slept next to her... twice... and of course we remained best friends. No, really, there is something seriously wrong with me.

Overall it is a pretty entertaining and captivating game. The end chapter (the fifth, if you are wondering) is fraught with animations and it seems you have nothing else to do but move a bit, see a movie, move a little bit, kill some guy, another movie and so on. The fight with Javed was the most difficult, I think, with the rest a complete breeze once I had upgraded the Igni spell to the maximum power.

I have, however, the certainty that with a simple hack to allow a person to click on the map and get there at warp speed (maybe stop if there is a monster on the road or something) this game would have been three times shorter and a lot more fun. I started with a lot of expectations about it, though, and maybe that is why I felt a little disappointed, especially with the "boss" fights which seemed to involve a lot of talking and hiding behind minions until I got to them and very easily kicked their ass.

Time to play The Witcher II, I guess! I leave you with a video review of the game.

Also, for more information about the Witcher, like the choices you can make and the consequences or the quests you never got around to finishing, go to the Witcher Wiki