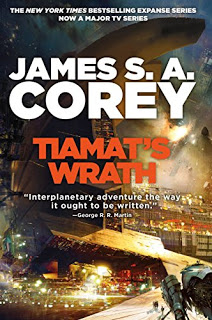 Tiamat's Wrath comes after a roller coaster of a ride. I absolutely loved the TV show so I started reading the books, concluding that the show was better. Of course, being good, it almost got cancelled until it was picked up by Amazon (thanks, Jeff!), but I continued to read the books. The part that I loved, the realistic colonization of the Solar System, got quickly left behind in favor of Stargate-like portals to other worlds, not one but two God-like alien races and, in the seventh book, a Nazi-like occupation of the entire humanity. Like? Even the small hints that suggested space travel using (impossibly efficient) fusion drives takes months and years got left behind in favor of fast paced action. The books themselves followed the same pattern of going bad, then coming back up again and being amazing, with the only commonality being the crew of the Rocinante, smack in the middle of everything, somehow always influencing things at planetary and civilization level.

So how was the book? Predictably bad. Predictably good. Equal bite size chapters that tell a rather bland story until the end when everything comes together in a cathartic way and kind of makes up for the rest. The writing style of the two authors known as James S.A. Corey is professionally good, without anything outstanding. The characters are empathetic: a major one dies, one is reborn, a new one appears. The same roller coaster and the expected, but still annoying, desire to read the next book when I know it will take another year for it to be written.

As far as I know, the next and ninth novel will be the last of the series, which is painful, because The Expanse, for me, was the perfect blend of pulp and space science. Typical to serialized American fiction it went too far too fast (leaving its soul behind to catch up). Yet I still enjoy it. I wonder what my response would have been without the TV series. Still, if you are new to the subject, I recommend you read the first three or four books, then watch the TV series.