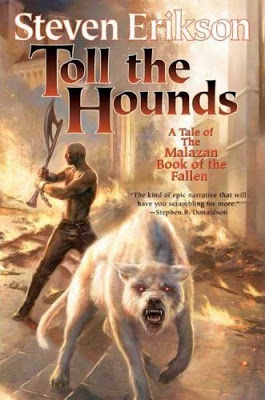 The eighth book in the Malazan Book of the Fallen series, Toll the Hounds was the worst, I think. First, Steven Erikson experimented with a narrator of sorts, all philosophical and moving the "frame" of the story with wise sounding words that actually sounded fake and convoluted like Kruppe's. Second of all, most of the characters started thinking deeply about all kinds of things that had no real relation to the story, all metaphorical and stuff. Third, the stories themselves were vague, disconnected or filled with "his words brought tears into his eyes" scenes. I swear, even Kallor sheds tears at one moment. The ending was a disappointment too, where the convergence of forces that we got used to in the series seems random and pointless. To top it all off, Fisher Kel Tath made his appearance, thus filling the book with bard poems.

As for the story itself... if you wanted closure on something previous, tough luck. Some new characters, some old ones die (including Hood, how cool is that?) most of the action happens in Darujhistan, while the rest is in Black Coral. No Crippled God at all! Also you may find Wiskeyjack fighting in Hood's army. Didn't they ascend? What is he doing there? Pointless battles abound (and I mean pointless, they are not even strategic, just an enumeration of people starting the fight and then, later on, finishing it. Most of the time the result is pretty much known beforehand, but the battle is honorable or something like that.

Mixed news about the ninth and tenth books in the series. First of all, the series ends! Yes, a huge book, with so many open ends and a great mythos, just ends, because the contract was for ten books. That is both brave and insane in the same time, although I suspect that future books will be scoped in the same universe, just not as part of the Malazan Book of the Fallen series. The books nine and ten will actually be a single two part story, with the ninth ending in a cliffhanger. Erikson apologized for this:

While I am, of course, not known for writing door-stopper tomes, the conclusion of The Malazan Book of the Fallen was, to my mind, always going to demand something more than modern bookbinding technology could accommodate. To date, I have avoided writing cliff-hangers, principally because as a reader I always hated having to wait to find out what happens. Alas, Dust of Dreams is the first half of a two-volume novel, to be concluded with The Crippled God. Accordingly, if you’re looking for resolutions to various story-threads, you won’t find them. Also, do note that there is no epilogue and, structurally, Dust of Dreams does not follow the traditional arc for a novel. To this, all I can ask of you is, please be patient. I know you can do it: after all, you have waited this long, haven't you?

The ninth book, Dust of Dreams, started cool, though, in a KChain Che'Malle city with a Matron giving a Destriant the task of finding a Mortal Sword and a Shield Anvil. The Destriant is human and the Matron is insane. Promising, huh? I was considering waiting for a year and reading both ending books, but how can I now?