I have started writing Chrome extensions, mainly to address issues that my browser is not solving, like opening dozens of tabs and lately DNS errors/blocking and ad blocking. My code writing process is chaotic at first, just writing stuff and changing it until things work, until I get to something I feel is stable. Then I feel the need to refactor the code, organizing and cleaning it and, why not, unit testing it. This opens the question on how to do that in Javascript and, even if I have known once, I needed to refresh my understanding with new work. Without further ado: QUnit, a Javascript testing framework. Not that all code here will be in ES5 or earlier, mainly because I have not studied ES6 and I want this to work with most Javascript.

QUnit is something that has withstood the test of time. It was first launched in 2008, but even now it is easy to use with simple design and clear documentation. Don't worry, you can use it even without jQuery. In order to use it, create an HTML page that links to the Javascript and CSS files from QUnit, then create your own Javascript file containing the tests and add it to the page together with whatever you are testing.

Already this raises the issue of having Javascript code that can be safely embedded in a random web page, so consider how you may encapsulate the code. Other testing frameworks could run the code in a headless Javascript engine, so if you want to be as generic as possible, also remove all dependencies on an existing web page. The oldest and simplest way of doing this is to use the fact that an orphan function in Javascript has its own scope and always has this pointing to the global object - in case of a web page, this would be window. So instead of something like: do something like this:
It's a silly example, but it does several things:
In this particular case, there is still a dependency on the default global object, but if instead one would pass the object somehow, it could be abstracted and the only change to the code would be the part where global is defined and acquired.

Let's start with QUnit. Here is a Hello World kind of thing:We put it in 'tests.js' and include it into a web page that looks like this:
The result:

As you can see, we declare a test with the static QUnit.test function, which receives a name and a function as parameters. Within the function, the assert object will do everything we need, mainly checking to see if a result conforms to an expected value or a block throws an exception. I will not go through a detailed explanation on simple uses like that. If you are interested peruse the QUnit site for tutorials.

What I want to talk about are slightly more advanced scenarios. The first thing I want to address is the concept of modules. If we declare all the tests, regardless on how many scripts they are arranged in, the test page will just list them one after another, in a huge blob. In order to somehow separate them in regions, we need a module. Here is another example:resulting in: 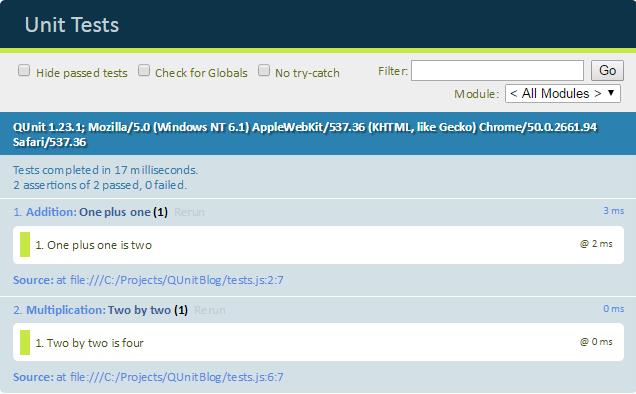 It may look the same, but a Module: dropdown appeared, allowing one to choose which module to test or visualize. The names of the tests also includes the module name. Unfortunately, the resulting HTML doesn't have containers for modules, something one can collapse or expand at will. That is too bad, but it can be easily fixed - this is not the scope of the post, though. A good strategy is just to put all related tests in the same Javascript file and use QUnit.module as the first line.

Another interesting issue is asynchronous testing. If we want to test functions that return asynchronously, like setTimeout or ajax calls or Promises, then we need to use assert.async. Here is an example:
First of all, we needed to declare that we expect a result asynchronously, therefore we call assert.async() and hold a reference to the result. The result is actually a function. After we make all the assertions on the result, we call that function in order to finish the test. I've added a line before the test, though, which sets the testTimeout configuration value. Without it, an async test that fails would freeze the test suite indefinitely. You can easily test this by setting testTimeout to less than the setTimeout duration.

Asynchronous tests raise several questions, though. The example above is all nice and easy, but what about cases when the test is more complex, with multiple asynchronous code blocks that follow each other, like a Promise chain? What if the assertions themselves need to be called asynchronously, like when checking for the outcome of a click handler? If you run jQuery(selector).click() an immediately following assertion would fail, since the click handler is executed in another context, for example. One can imagine code like this, but look how ugly it is:
In order to solve at least this arrow antipattern I've created a stringFunctions function that looks like this:which makes the previous code look like this:
Of course, this is a specific case, but at least in a very common scenario - the one when the results of event handlers are checked - stringFunctions with 1ms instead of 100ms is very useful. Click on a button, see if a checkbox is available, check the checkbox, see if the value in a span has changed, stuff like that.

Another thing I want to address is how to test Javascript that is intended as a web page companion script, with jQuery manipulations of the DOM and event listeners and all that. Ideally, all this would be stored in some sort of object that is instantiated with parameters that specify the test context, the various mocks and so on and so on. Since it is not an ideal world, I want to show you a way to test a typical such script, one that executes a function at DOMReady and does everything in it. Here is an example:The code assumes $ is jQuery, then it adds a handler to a button click to empty another item. Think on how this should be tested:
I was a bit lazy and changed the scripts themselves to check if a testContext exists and use that one. Something like this:which has certain advantages. First, it makes you aware of all the uses of jQuery in the code, yet it doesn't force you to declare everything in an object and having to refactor everything. Funny how you need to refactor the code in order to write unit tests in order to be able to refactor the code. Automated testing gets like that. It also solves some problems with testing Javascript offline - directly from the file system, because all you need to do now is define the testContext then load the script by creating a tag in the testing page and setting the src attribute:In this case, even if you are running the page from the filesystem, the script will be loaded and executed correctly. Another, more elegant solution would load the script as a string and execute it inside a closure where jQuery was replaced with something that uses a mock document by default. This means you don't have to change your code at all, but you need to be able to read the script as a text, which is impossible on the filesystem. Some really messy script tag creation would be needed
There you have it: an asynchronous test that replaces jQuery with something with an isolated context, loads a script dynamically, performs a click in the isolated context, checks the results. Notice the generic way in which to get the value of the global object in Javascript.

A last point I want to make is more theoretical. After some consultation with a colleague, I've finally cleared up some confusion I had about the direction of automated tests. You see, once you have the code - or even in TDD, I guess, you know what every small piece of code does and also the final requirements of the product. Where should you start in order to create automated tests?

One solution is to start from the bottom and check that your methods call everything they need to call in the mocked dependencies. If you method calls 'chrome.tabs.create' and you have mocked chrome, your tabs.create method should count how many times it is called and your assertion should check that the count is 1. It has the advantage of being straightforward, but also tests details that might be irrelevant. One might refactor the method to call some other API and then the test would fail, as it tested the actual implementation details, not a result. Of course, methods that return the same result for the same input values - sometimes called immutable - are perfect for this type of testing.

Another solution is to start from the requirements and test that the entire codebase does what it is supposed to do. This makes more sense, but the combination of possible test cases increases exponentially and it is difficult to spot where the problem lies if a test fails. This would be called acceptance testing.

Well, the answer is: both! It all depends on your budget, of course, as you need to take into consideration not only the writing of the tests, but their maintenance as well. Automated acceptance tests would not need to change a lot, only when requirements change, while unit tests would need to be changed whenever the implementation is altered or new code is added.

I am not an expert on unit testing, so what I have written here describes my own experiments. Please let me know if you have anything to add or to comment. My personal opinion on the matter is that testing provides a measure of confidence that minimizes the stress of introducing changes or refactoring code. It also forces people to think in terms of "how will I test this?" while writing code, which I think is great from the viewpoint of separation of concerns and code modularity. On the other hand it adds a relatively large resource drain, both in writing and (especially) in maintaining the tests. There is also a circular kind of issue where someone needs to test the tests. Psychologically, I also believe automated testing only works for certain people. Chaotic asses like myself like to experiment a lot, which makes testing a drag. I don't even know what I want to achieve and someone tries to push testing down my throat. Later on, though, tests would be welcome, if only my manager allows the time for it. So it is, as always, a matter of logistics.

More info about unit testing with QUnit on their page.