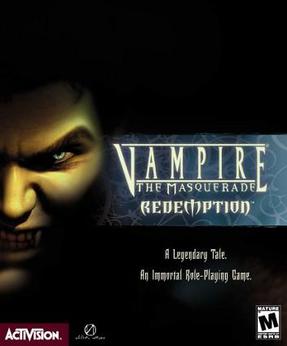 I got this game from a colleague of mine, something she labelled as strategy. Well, it was actually an RPG, and a pretty good one, too. Considering that it is rather old, it certainly goes up there in my games top. It is one of the games in the Vampire the Masquerade series, codenamed Redemption and released in 2000 by Activision.

Ok, the idea is that you are a crusader, left behind by your company due to severe battle trauma. A helpful and kind nun takes care of your wounds and makes you better. However, you soon find out that the city (of Prague) is plagued by monsters and undead creatures. As a devout follower of God's path (infidel! I kill you!), you get your mighty sword and crusader expertise and proceed on a debug mission. It would be pointless to go further from here, as the story evolves until you get in the year 1999 and in the cities of Prague, Vienna, London and New York.

The fun of the game is that you use both vampiric attacks and magic and a bit of strategic thinking in order to attain your goals. Starting out with a single character, you get to have up to four.

Now about the fast lane: how to finish the game as soon as possible. First of all try to equip your characters with the best armour and weapons you can find. At first you don't have a lot of money, but you find all kind of stuff when you kill monsters. Second of all, you will get to find a lot of rings and necklaces and bracelets that only improve APP(earance). You might think that wearing them will pimp your vampires, but Appearance is very important for one of the most crucial spells in the game: Enchantment. The other very important spells are: Feed, Blood Healing and Ice Statue. If you master these four spells you can defeat anyone. Unfortunately, Ice Statue will not be available until you defeat the Tremere, which is quite advanced in the game. Any spell that makes the target not attack will be as good, though. The next important spells are Awaken (wakes up a dead member of your group) and Walk the Abyss, which allows you to instantly transport to your save game place (the Haven) and store your objects and increase your stats. A good secondary spell is Spirit's Touch, which will identify the unknown objects you find.

Another important thing is to go to Options -> Controls and remove all spells from your group except auto healing. Otherwise your vampire buddies will gobble up blood like it's 12 years old Whiskey. And talking of control, near each character's picture there is a green light. Click on it and the guy will not follow you around like a dumbass, killing the people you are trying to feed upon or do magic tricks on.

And back to the fast lane: use Enchantment to control an enemy to fight the others around him when there are more than one foe. Then run in front of him with one of your group, so that he follows (or do that from the start if you can separate him from the others or if he is alone), then wait with another character with big Feed rating and, of course, Feed until the foe dies. In order for this to work, the little green lights must be off, otherwise they will follow and attack like idiots. In the case of monsters and non-blooded creatures, freeze them and kill them.

Also to note is that Christof's AI is more violent than for others. Even without his little green light, he will still attack stupidly. Another thing to note is that using the middle mouse button, the characters will attack with a slower, but stronger attack, optimal for frozen creatures or when they are fighting someone else in the group. Remember to keep your Feed guy empty by letting the others feed on him!

Ok, that's it. The game has a multiplayer option as well, but I haven't explored it yet. The movement AI is the worst part of the game. Also the story could have been more interesting. At some times I managed to enter unfinished portions of the game, where characters would just sit and not interact or where the dialogue would have been replaced by general options like "Threaten" "Leave Alone". Other than that, it's a pretty smooth, though linear, game.

If anyone is interested, there are three possible endings, and here are the YouTube links. Just make sure you want to see them before you finish the game or not.