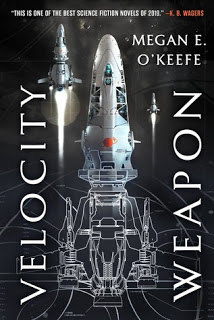 I can't decide if Velocity Weapon is brilliant or stupid. What I can say is that I didn't like it. Megan O'Keefe tells a story of three characters: a gunnery sergeant who ejects her pod during a space battle and is picked up by an intelligent spaceship, her brother who is a member of the Prime Protectorate and does everything to find her and a thief on some other planet who stumbles upon a strange lab that changes her entire life.

The writing is competent, nothing inspiring, though, and probably that is why I had difficulty finishing the book. But there are also some features of the story that I didn't like. For example of the three main characters who start the book on equal ground, the thief gets less and less space and, worse, her story never connects to the others. It's like O'Keefe wrote a book and a novella and then merged them into a larger book, even if their only commonality is the same universe. Then there is a part of the story that I got invested in, only to be aborted midway; I can't say more without spoiling the story, but I didn't like that.

The thing that bothered me most, though, is how the plot meanders instead of getting to the point. I used to think that a good story would be less straightforward, but now that I read one that just comes and goes, gives you glimpses of the world, then does nothing with them... it just felt like wasted time. Don't get me wrong, the author builds a world with vast opportunities, a universe of multiple colonized worlds connected by star gates which are controlled by the Primes and their technology originated from an alien artifact. She is just beginning the story. The characters might yet come together, the villains might become clearer, the whole thing felt potentially epic, only one would probably have to read all of the books to understand where O'Keefe is planning to go.

Basically the book is a string of almost random events, driven by forces that are never made clear, then somehow brought together by incredible coincidence, while the characters are barely sketched and hard to relate to, especially the male ones. The world has a lot of potential, but little is built on it so far. It feels like Star Wars, a little: a galaxy far far away where everybody is related or knows each other and everything in a chapter happens on one planet only. And it felt dated, as well.

So I can't decide: is this the start of a wonderful epic universe with immense potential or is it just a stupid space opera book that is not very good? I just didn't like it.