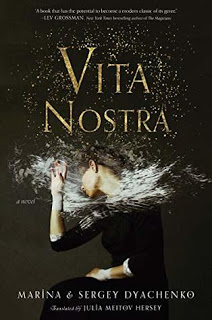 Imagine Harry Potter were a Russian girl named Sasha Samokhina. Instead of an Oliver Twist childhood followed by the happy admission to a place of high learning, she starts off within a happy family and then is forcefully inducted into a village institution apparently bent on making people crazy upon punishment of hurting said family. Instead of a loyal gaggle of friends to help the hero through random quests, it's a bunch of normal kids that either hate her, ignore her or get infatuated with her for their own random reasons. Instead of a nasty revenant with superpowers, she has only her own weakness and her insane teachers to fight against. And most of all, everything she achieves she does through effort, not by being lucky, getting powerful items from mysterious friends or being helped by previously unknown actors.

This is Vita Nostra - and not a book about Italian mobsters as the title made me believe, a book written by two married writers, Marina and Sergey Dyachenko, who wrote 26 other books before this you probably have never heard of because they are in Russian and no one bothered to translate them to English. I wonder if I would have ever heard of them if there weren't currently living in California. There are, of course, similarities to Harry Potter: the same idea that teachers perceive pupils as incompetent infants that cannot be trusted with information and power, for example. The same underestimation of children leads to both the successes of Potter and Samokhina (if hers can be called successes, it's a Russian book after all). There is also the isolation of children, away from family, friends and the rest of the world, a typical indoctrination move. Will our hero keep her morals or succumb to the ideas forced upon her by cruel educators? Will the teachers be proven right and their methods validated, or are they just assholes? Is this really a Hogwarts thing or more the Stanford Experiments meet 120 Days of Sodom? Well, that is for the reader to find out, as they go through the three books (yes, Russians are affected by trilogiopathy as well).

Warning, though, the book starts very slowly and with a style reminiscent of a lot of stories I disliked profusely: the dream sequence, where you cannot be certain that what the character perceives is real or not. Also, the ending is abrupt and says almost nothing. Oh, yes, I can speculate, but would be the point of that? In order to understand what is going on, you just have to read at least the second book as well.

Bottom line is that I liked the book after I got through the slow beginning, I was captivated by the lead character and I found it hard to put the book down, but it's not always easy to empathize with Sasha and the rest of the characters are not deeply explored.