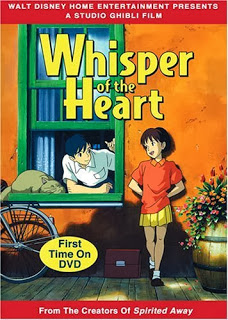 I've reached the last of the animes in the Studio Ghibli series that I wanted to watch (again) and it was nice that this one got to be the final one. You see, before that I had watched The Cat Returns and I rated it mediocre, so unlike the beautiful movies from the same collection. Whisper of the Heart seems to be the film designed to redeem it.

The story is that of a young girl who likes to read a lot of books. She notices that most of the books that she borrowed from the library had the same name on their library cards, a boy that she didn't know. Coincidentally she follows a fat cat, apparently named Muta, to the shop of an old man who has a beautiful doll of a cat in a suit: the Baron of Gikkingen. You guessed it, two characters from The Cat Returns. And behold, the old man is the grandfather of the boy that kept borrowing the same books.

Whisper of the Heart seems to just take beautiful elements from other Ghibli animes and bring them all together in a wonderful union. The windy hills of Tokyo, which still has beauty despite the expansion of the city. The young girl who is not only smart and sensible, but also ambitious and kind. The family who is sometimes annoying and overbearing, but that in the end is the source of support for the development of the child it nurtures. The indolent fat cat :)

And then the love story, something that springs from common interests and a karmic connection between two people who seem to have been meant for each other. But there is more. They don't just click and that's it; they get motivated and energized to be the best of what they can be in order to honor the relationship in which they enter. In a way, it is a continuation of the warm and supporting family model from which both protagonists come.

One of the scenes in the anime was so funny to my wife that she spoke the Japanese words from it for a week. What a wonderful thing to have a film that not only makes me want to be a better man, but that already does make me be so by connecting me stronger to the one I love. And I watched it on Valentine's day, too! How can I rate it any less than with a perfect 10?

Returning to The Cat Returns, it somehow felt to me that the story linked to it also from the perspective of the ever aspiring artist; the rough and unpolished plot there sounds a lot like the story Shizuku writes, her first but one in many, the stone that will allow her to get to the skill and experience to do this story, which is so much better and complete. It does seem that way to me, since I watched The Cat Returns first, but chronologically Whisper of the Heart was made seven years earlier.

Now I don't know exactly in which proportion is Hayao Miyazaki responsible for the great quality of this film and story and how much Hiiragi Aoi, the writer of the original manga, but I heartily recommend the end result. I may be exaggerating, but this could be the best anime Studio Ghibli ever did, and that is saying much.