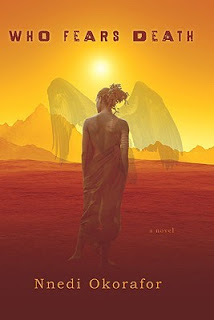 Who Fears Death is an interesting book mainly because of the Nigerian background of Nnedi Okorafor, the author, and the subject vaguely inspired by the atrocities in Sudan. The fantasy plot revolves around a girl resulted from intertribal rape who has to deal with the injustices of her world using her magical powers. Imagine a Harry Potter book in a German extermination camp scenario where he is a Jewish girl and you get close. In fact, this and other books on the subject of tribal hatred in Africa should make any white supremacist feel good about themselves, because there is no worse racism than between violent religious uneducated tribes that pretty much look the same.

Yet the book's interesting factor kind of stops there. The African culture references throughout the story keeps it entertaining, but the plot is a classic hero arc with pretty much all of the flaws inherent to the genre. Hero is young and powerless, discovers powers, is guided by mentors that keep from her just about everything there is to know and use up until she needs it, evil villain to whom she has a direct connection and opposition, friends that are there just to support the hero, things that happen for no other reason than they needed to further the story in a particular direction, she has amazing powers but uses them sparingly and often is stopped from using them for moral reasons by her friends and so on. In fact, it gets a lot worse, considering the hero is an African girl who could get killed at any moment by an angry mob just for the color of her skin, moving around in a society where even her boyfriend thinks it's OK to keep things for himself or treat her patronizingly just because of her gender, not to mention the old male mentors.

So while the book is interesting and well written, it does have a major flaw in the way it was structured as a story. Perhaps the docile Black woman who occasionally gets upset and then regrets it resonates better with African audiences, but for a Westerner it might get a little frustrating. It is a book worth reading, mainly because of the culture shock one experiences while reading it, but it could have been better.