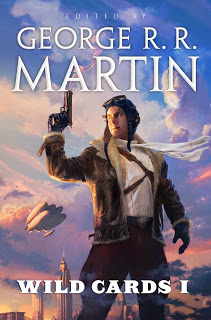 I accidentally heard of the Wild Cards books a few weeks ago, but the concept fascinated me. The plot is that of an alternate America in which an alien virus caused massive deaths, but also strange mutations in 1946. The virus, something a bunch of aliens wanted to test on Earth as a bioweapon, kills 90% of its victims, mutates in horrible forms 9% of them, but also gives powerful abilities to but 1%. This 1% are called Aces, while the deformed ones are called Jokers, the analogy with a deck of cards giving the series its name. What is even more interesting is that this is like an open source literary universe, edited by George R. R. Martin, but in which a lot of writers are creating content. First book was published in 1987, and more and more were published and still are in the present. Some of them are collections of stories, some of them are full featured books; they all happen in the same universe, same heroes, and Martin is making sure they are ordered chronologically and have consistency. I found the concept intriguing.

Anyway, I've already read the first two books and started reading the third and I like it. It has the feeling of the Union Dues stories and Watchmen: dark, bleak sometimes, pulling no punches when it is about human pettiness, base desires or social ugliness. It also has some positive messages and classic "good wins in the end" stories. I was impressed by the faithful following of American history, including savage McCarthy witch hunts against jokers and aces, a Vietnam war with the appropriate Flower Power anticulture, complete with actual historical figures that somehow get affected by the virus (like the werewolf Mick Jagger).

Now I am not saying that this is the best book series ever written. It certainly has boring or lagging parts, some of it is slightly puerile (after all it is a superhero series), but so far I enjoy it. It is worth mentioning that there are 12 books published by Bantam Books before a "new cycle" appears, published by Baen, then two from ibooks - a publishing house that suddenly went down - and now Tor Books is apparently publishing the rest (a revival, it is called). 21 books so far and another one set to be released this year. In other words, some books may be better than others and I can only discuss my feelings after reading the first two.

In conclusion, it felt weird to not have heard of these books until now. Certainly they gained more popularity with Game of Thrones getting all this attention, but still, an alternate history superhero series of more than 20 books should have had some impact on me so far. I am glad I finally got wind of them and I enjoy them so far. I hope I find a system of filtering the books, though. I don't know if I am ready to read 20 books at once.