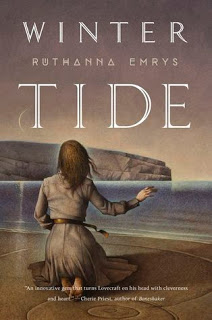 Ruthana Emrys wrote the short story The Litany of Earth as a reinterpretation of Lovecraft's The Shadow over Innsmouth, where the people of Innsmouth were actually the victims of persecution from the government. Extending the story to the first book in a trilogy, Winter Tide acts as a sequel to the Lovecraft short, telling the story of some of the few people of the water working with the US government to investigate the misuse of their magical rituals.

If in Shadow over Innsmouth, the horrible fish people were being righteously rounded up by the authorities and interned into camps, their town and traditions forcibly destroyed, in this book they are the victims of persecution, a subspecies of humans that just wants to be left alone. Their magical rituals are more about communion than power, but some of them can be terribly misused, like the body swap technique. This gives the author opportunity to add to the story the Yith, ancient race of mind travelers who have the only concern to archive the experiences of sapient beings before they go extinct - with the added horror that they face any extinction event themselves by mass swapping into another civilization, leaving those poor souls displaced in unfamiliar bodies and facing certain doom - depicted by Lovecraft in The Shadow Out of Time, as well as hint of a body swap misused as means of trying to achieve immortality, as told by Lovecraft in The Thing on the Doorstep. So when one of the last females of the water people is asked to help by an FBI agent, she decides to put aside her distrust and horror and help the ones who murdered her people in the purpose of at least preserving her race's reputation and preventing the use of their magical arts in the terrible world wars the air people were waging.

You have to admit when you think Lovecraft, you don't often imagine a gay female author writing about the importance of diversity, community and love, yet this is what Winter Tide is. And it has a quintessentially female style of writing, where the lead character helps the people she should normally hate in order to bring peace, she solves problems by bringing people together and treating them with familial love and encouraging their differences rather than using violence. Her purposes are selfless and she wields power not as a sword, but as shelter.

While the style felt a little too formal and the pace was rather slow at the beginning, I found myself wanting more by the end of the book. It felt like a strange melange of Lovecraftian lore, notoriously difficult to bring to a modern form - yet Emrys did it effortlessly - and a style of writing that brought it back to a more ancient feel, thus relating modern themes in a work that still tastes like Lovecraft. The second book in the series, Deep Roots, just came out and I intend to read it as well.