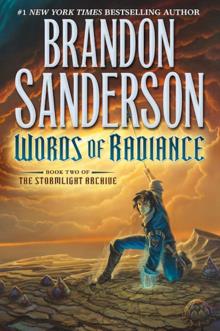 Brandon Sanderson does not disappoint with the sequel to Way of Kings. Quite the opposite, in fact, weaving more and more into the vast tapestry that is the world of the Stormlight Archive series. The characters converge towards a point in time and space where everything and anything will be decided, the fate of the entire world, with just a few courageous people standing between life and complete desolation.

Words of Radiance focuses more on the main characters, with less distractions that might take the reader out of the flow of the story. However, even if the scope of their achievements explodes, the power of their stories loses a bit of the desperation and energy from the first book. We no longer have powerless broken people trying to survive, but magical beings full of strength doing extraordinary things. Ironically, it is their success that makes them less easy to identify and empathize with. The author throws challenges in front of them, but they seem inconsequential compared to the ones in Way of Kings. I feel like he has grown attached to them and finds it difficult to torture them as a good writer should. On the other hand Sanderson is a positive person, most of this writing being lighthearted and less dark and brooding, so this is not a disappointment.

The climax is a gigantic clash between forces that have slowly grown since the beginning of the series. Sanderson does a wonderful job tying the separate strands of his world into a single story, maybe a bit too much so. The Roshar and Helaran connections felt a bit strained, not unlike Luke Skywalker discovering his greatest ally and greatest enemy are family members. The author better be careful not to put immense effort to create a vast universe, only to shrink it by mistake by connecting everything with everything and everybody with everybody.

And again the final pages of the book feel weak, as they come after the powerful climax, yet they are necessary to tie in some story arks and seed the beginning of others. Yes, the book ends with a promise that what happened in it is just the mere beginning, a small part of the larger picture, so expect little closure. Sanderdon is a prolific author and I am sure he will write the next books in the series fast enough to keep me engaged, but be aware the series is planned to be at least ten main books with about just as much companion stories and novels. This... will take a while. Oathbringer, the third book, is scheduled to be released in November 2017.

Bottom line: I recommend the book and the series and the author. No fantasy reader should ignore Brandon Sanderson if they are anything like me. Just make sure you are ready to get invested in the story only to wait every year for the next chapter to be released.