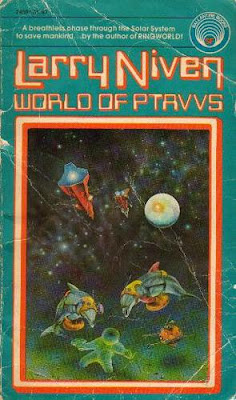 World of Ptavvs is a book first published in 1966, therefore it feels very dated indeed. Still, while reading the book, I've realised how I missed the style of the sci-fi back then, when the world was grand, the future was brilliant, people would all be intelligent and rational, doing what is smart and what is right, with a power of will that defined their very being. Remember Asimov? It's like that! And it's no wonder, both Larry Niven and Isaac Asimov were technical people at their core, even if they have expanded their interests in many other spheres as well. I have to reiterate this: in this time of Generation Me, when everything seems to be focused on the intensity of one's emotions, rather than on what the situation at hand is and what to do about it, when legions of film makers and young adult writers pound this insane idea that what we feel is more important than what we think and our own belief is more important than the welfare of the people around us, in these horrible times books like World of Ptavvs feel like good medicine.

Not the the book was not ridiculous in many aspects. The fusion drives, the trips towards Pluto that took a few days, a "belter" civilisation populating the main asteroid belt and moving around in ships that were essentially huge fusion bombs, the way people with terrible burns and psychic trauma would calmly talk about their ordeal to the scientific investigator come to solve the problem, the idealistic discussions that spawned out of nowhere in moments of maximum tension, the intelligent civilisation of dolphins that dream to go to space, the psionic powers... all of these were at the same time wonderful to behold and quite silly. However, I liked the book, I gobbled it up.

The plot is about this alien that can control the minds of others. Their entire civilisation is based on enslaving other populations via their Power. He is the victim of a malfunction in space and activates a retarder field that will protect him from time and space interactions until someone removes him from this stasis. Thus, he reaches Earth and remains on the bottom of the ocean for billions of years. When people get him out of his shell, all hell breaks loose, the book transforming into a space race and a philosophical introspection at the same time.

I can't make justice to the subject in a few words any more than I can do it in more words without spoiling the pleasure of the read - I've already said too much. If you feel you are in the mood for old school sci-fi, World of Ptavvs is a good book, reminiscent of the works of Asimov or van Vogt. Silly, yet grandiose at the same time.